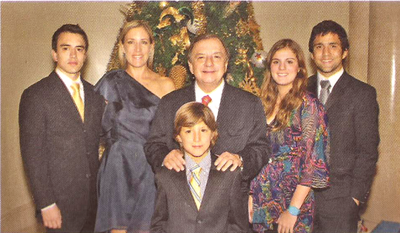 We see businessman Álvaro Noboa Pontón together with his wife and children.

His primary education was carried out at the La Salle School in Guayaquil, his secondary studies at the Le Rosey in Switzerland, where at both he was the best student. He graduated with a degree in law from the University of Guayaquil with excellent grades, and completed graduate studies in Administration at the American Management Association in New York.

… he speaks three languages fluently:  Spanish, English and French.  He is happily married to Dr. Annabela Azín. His children are Daniel, John Sebastián, Santiago and Carla. In 1997 he acquired the stock package and control of his father’s companies; besides which he manages 110 companies founded under his own initiative in Ecuador and throughout the world, including Europe, Japan, New Zealand, the United States, and Argentina.  In 1996 he presided over the Federal Reserve of Ecuador and in scarcely six months, with the never-before attained sum of 2 billion dollars, achieved the highest monetary reserve in the history of the country.

Álvaro Noboa has also been the founding President of the Association of Real Estate Representatives, of which, today, he is Lifetime Honorary President. He is the founder of the “New Humanity Crusade,” Foundation of Common Action of the People, which, for the last 26 years, with its own funds and those of his businesses carries out important social work in education, healthcare, employment, assistance to vulnerable groups, etc.

The businessman acquired the major part of his fortune on his own merits, working with great responsibility since he was 19 years old, given that the educational system in Ecuador at the time allowed study and work at the same time. Upon the death of his father, he inherited 1% of his current fortune. In 1997, with 25.1% of the stocks of the banana business, he acquired another 26% of the stock and assumed control of Fruit Shippers, Ltd, the company that administers the family business. Álvaro Noboa seeks out new international markets for his products, constantly organizing meetings with foreign investors to create new businesses.

His personal fortune is estimated to be close to 1 billion US Dollars, which is currently managed as much from his personal dealings through more than a hundred business and the stocks acquired in 1997 from his father’s widow, Mrs. Mercedes Santistevan Arosemena de Noboa, as for his banana business, marine transport and real estate companies. Noboa’s export company, Exportadora Bananera Noboa, had sales of $220 million dollars in 2004 and $219 million dollars in 2005.

In honor of the birth of his late father, Luis A. Noboa Naranjo, and to support art and culture in Ecuador, on April 1, 2008, the first biennale of painting carrying his name was held, and gathered together national and foreign artists resident in Ecuador. In 2012, Noboa established the III Guayaquil Biennale of Painting which carried the name, “Álvaro Noboa”.

As  a businessman, he is continually looking for new business opportunities and concerned for the economic situation of his country, in October 2009 Noboa, looking for new international markets for his products, organized meetings with foreign investors to carry out new business.

Since the year 2003, Álvaro Noboa has taken part in the annual Businessman’s Summit Meeting of Latin America. The summit originated in the year 2003 under the initiative of Carlos Slim of Mexico, until now the wealthiest man in the world, and personal friend of Álvaro Noboa.

DENUNCIATIONS AND ATTACKS AGAINST HIM

From the beginning of his public service career in 1998, when he ran the first time for the office of President of the Republic, he confirmed that he had been the object of multiple denunciations and demands, both for taxes and labor issues, as well as political and personal attacks, initiated – according to him – by his enemies with power and influence within the country who would like to wound him with a permanent smear campaign against his honor and that of his family and to avoid his fight against corruption, in favor of the poor and the transformation of Ecuador into a developed country.

Representing his party, he has been a candidate for President of the Republic of Ecuador on two occasions, 1998-2002 and 2006, acquiring the support of millions of Ecuadorians who declared themselves for change with their vote at the polls, for which he had a distinguished political participation that took him to the second round in the three presidential elections. On September 30, Álvaro Noboa was elected National Assembly Member.

On May 2, 2012, Noboa publicly announced that he would try, for the fifth time, to become President of the Republic of Ecuador, stating that he was a Presidential pre-candidate for the country’s elections in 2013.

He is the leader of the Party for National Action for Institutional Renovation (PRIAN), a populist party that he himself founded after separating from the also populist Ecuadorian Roldista Party (PRE). He was a presidential candidate for the PRE in 1998 and for the PRIAN in the years 2004 and 2006. He was on the brink of reaching the presidency of Ecuador by democratic elections; he is a man with great vision and potential, a pragmatic, eclectic and enterprising statesman, far from the ideological fundamentalism that discourages private enterprise.

“Ecuador is suffering from an internal crisis cancer,” he declared to the country’s press, one which has forced him to visit countries like France, Croatia, Belgium, Spain, among others, that have invited him to invest while in Ecuador there is no support for business development on the part of the Rafael Correa government.

Álvaro Noboa has been characterized as a political and business leader, for which he is considered part of history and he will continue to make history with his work, his social efforts and public service, principally for loving and serving human beings, and he announces that he will not stop before the slurs and attacks of all kinds, because he loves Ecuador and desires education, health, housing, and an honorable life of wellbeing and development for his people.