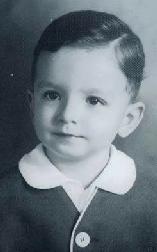 I call on God’s inspiration for this message. Why have I come today? I come before you because even though there are a good many Ecuadorians who have a clear image of who Alvaro Noboa is, there are others who do not. My political adversaries and other jealous individuals have devoted themselves to tarnishing my image, thus it is best you learn from me who I truly am.

I was born on November 21st, 1950, in the city of Guayaquil. My father was Luis Noboa and my mother, Mrs. Isabel Pontón. I was always top student in high school, both at the San José La Salle High School in Guayaquil as well as at Le Rosey School in Switzerland. Then I attended Guayaquil State University from which I graduated with a degree in Law; later, I took graduate Business Administration courses at the American Management Association in New York. 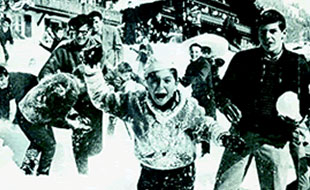 A photo from LIFE Magazine. It portrays a snowball fight among the students of Le Rosey, in Gstadd. The young boy at the center is Alvaro Noboa, and the one at the right is Winthrop Rockefeller.

I am trilingual; conversant in English, French, and Spanish.

As the Ecuadorian academic system allows one to work and study at the same time, I have worked since I was 19 years old.

I established several businesses, including Promandato Global, which has constructed a series of buildings and developments in Ecuador. Today it is reputed to be the real estate company with the most extensive property holdings.

I also started the Banco del Litoral, considered a grade-“A” Institution and one of the most solid banks in Ecuador. 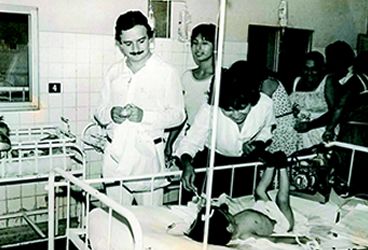 I established Financiera Global (a finance company), the magazine “La Verdad”, and the Fundación Cruzada Nueva Humanidad (Crusade for a New Humanity Foundation) through which I have worked for over twenty years on behalf of the poor.

I later acquired countless enterprises and today I manage over 110 companies worldwide.

Even though my adversaries refer to me as “The Heir”, I inherited only 1% of my wealth; the rest I have either created or acquired through hard work.

Those companies founded through my own efforts were established between when I was 19 and my father’s demise when I was 43. They were set up with the support of associates such as Sucre Pérez Baquerizo, Francisco Pino Maulme, and Rodrigo Icaza.

I never received or requested help of any kind from my father because I wanted to prove to myself I could succeed on my own, and not because I was Luis A. Noboa’s son. 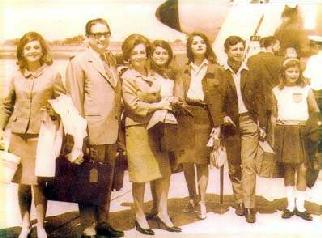 I have been the subject of envy, I have been attacked and persecuted for being the top entrepreneur in Ecuador and one of the leading businessman in Latin America.

I, Alvaro Noboa, have also been attacked because of my concern for the poor. I am attacked by those who find my love for the poor and their love for me intolerable.

In 1996, I assumed presidency of the Ecuadorian Monetary Board. At that time the currency reserves totaled between 1,300 and 1,400 million, and I increased them to approximately 2,000 million dollars.

Today, even though we have a dollar-based economy, reserves total approximately 1.1 million dollars. Or, one could say, no one else has brought the monetary reserves to the level I was able to achieve.

I was also Founding President of the Real Estate Brokers Association, in honor of which they me lifelong Honorary President as well as because I was able to secure legislation in defense of real estate agents.

In April 1997, I acquired control of my father’s companies by purchasing the shares of his widow, Mrs. Mercedes Santistevan.

I have companies the world over, including Japan, Europe, New Zealand, the United States, and Argentina. I have a beautiful family, friends, and people who are very dear to me;however, what I treasure most is the love of common Ecuadorians, a love I have felt for many years since founding the New Humanity Crusade, a love and support that revealed itself in 1998 when, according to popular consensus, I won the Presidential elections.

I have a deep love for my fellow Ecuadorians, and I share their dream of converting Ecuador into a wealthy country; where employment opportunities exist for everyone; where the poor can attain a standard of living like the middle-class in Chile and other developed countries; and where God reigns in our hearts. 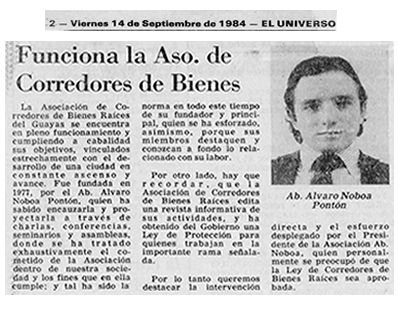 As Presidential candidate of the Republic of Ecuador, I have set key goals for myself, including leading Ecuador out of its crisis, providing employment for all Ecuadorians and eliminating corruption. Besides which, I have social goals which I will explain later on.

1. Alvaro Noboa and his fight against corruption 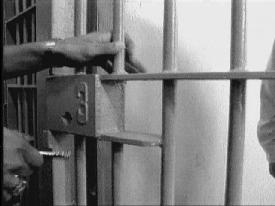 How I will combat corruption I will fight corruption by avoiding commitments to corrupt politicians. For that reason, I have financed my own campaign and not allied myself with any political parties or financial groups or any person.

Obviously, if one accepts the support of pressure groups or corrupt politicians acting outside the law, they will expect things in return and that furthers corruption. Therefore, I repeat, the best way to combat corruption is to be independent of any political party or commercial or financial pressure groups that might seek payment for their support during my period in office.

2. Economic Recovery and Providing for all Ecuadorians. 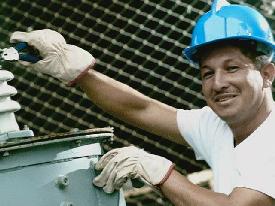 Obviously, given that the State needs an income, I will maintain tax revenues generated by oil as well as those relating to customs, IVA and other taxes to the State. I will only abolish income tax which represents a mere 10% of State income, while its elimination will generate an economic revival and draw investment to our Ecuador. 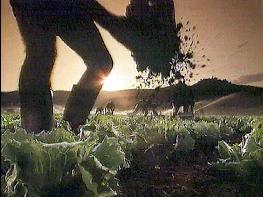 The arrival of investors, attracted by the elimination of taxes on income, will generate investment by both foreigners and locals in Ecuador.

The investors will establish industries that will offer greater employment, mining will be developed; oil, trade, tourism and fishing will all flourish.

There will be enough funds in the banks to award loans to farmers.

Besides technical advice, they will have low-cost agricultural supplies, irrigation will be boosted by wells and other technologies, thus increasing food production for both local consumption and exportation.

I will provide stimulus for tourism, hotels, restaurants, and family resorts that, in turn, generate employment.

In the absence of an income tax, the international banking community will flock to Ecuador, creating abundant money supplies to fund cement housing for all Ecuadorians, and to establish businesses that will generate employment for all in Ecuador. 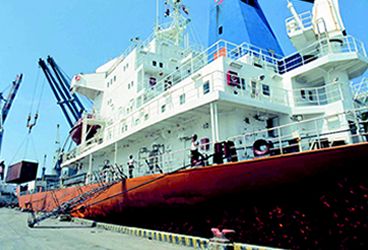 If, according to my housing plan, between 100,000 and 200,000 houses are built each year, between one and two million jobs will materialize in the city. If my rural plan is adopted and agriculture is enhanced, one million jobs will be generated in the countryside.

With enough businesses generating employment in Ecuador, the labor force will be in greater demand, in turn generating a greater demand for better wages. Furthermore, this will allow all poor, unemployed Ecuadorians to find jobs.

This increase in employment and wages will allow Ecuador to become a developed country.

As I am very aware of the pain of Ecuadorians, my plan entails how to achieve social goals. What I would like to explain to Ecuadorians is that everything in life has a price: social policies cost money and for that reason it is important to have both an economic and a social proposal.

It is impossible to realize social proposals without a solid economic plan.

For that reason, I have spoken of my economic proposal. Now I wish to discuss my social plan, and how to achieve its goals. 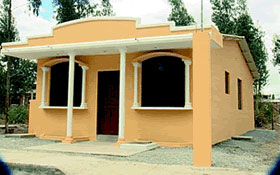 My housing plan proposes the construction of cement houses with values beginning at US $5,800 each. Such houses could be paid off at the rate of $48 dollars a month.
HEALTH PLAN
The health plan will be directed by Dr. Marcelo Cruz and Dr.Annabella Azín (Mrs. Noboa). The extensive work performed by the New Humanity Crusade has been carried out in full view of the public. 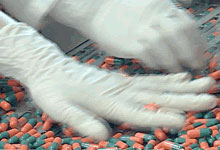 The basis of our health plan is the prevention of disease via a program of vaccination and the use of medicines distributed under our administration through a network of 1,800 pharmaceutical outlets throughout the country. Furthermore, there will be an integration of all hospitals in Ecuador, and any Social Security affiliate will also be able to receive private medical attention by showing their Social Security card to the doctor or clinic of their choice.

Via MINUVI, badly needed water supplies and proper sewage facilities will also be supplied to impoverished neighborhoods in Ecuador. 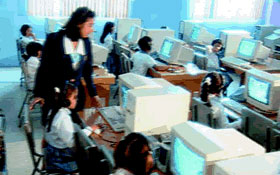 Police security should be emphasized in poor neighborhoods for they represent the most unprotected areas. The poor who are robbed are left destitute and therefore are in even greater need of protection.

To effect this change, I need all of you Ecuadorians to support me. Therefore, I ask for your vote to become your next President so that together we can change Ecuador. To change her into a modern state, into an empire with riches for all and where God resides in our homes. 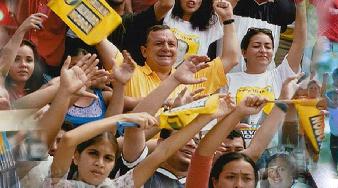