La Fija, equestrian magazine in Ecuador, made a coverage of Facheng, the horse of businessman Alvaro Noboa. The colt won the sixth race of the last programming in muddy pitch. 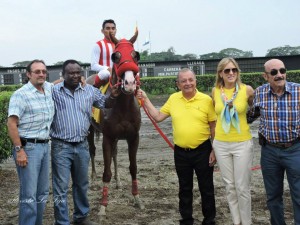 “Rookie Facheng in season record,” was the title the magazine posted on its Facebook profile about the horse that, besides winning the race, got a timestamp 1.03 “4/5 on 1,100 meters.

It also details how close was Facheng of taking away the national record to Bonito, who won17 years ago.

The horse achieved its victories, ridden by jockey Joffre Mora, and supported by its happy owner, Alvaro Noboa, whowitnessed with his family the race horse.

The text published on the web is accompanied by photos of the winner colt during its career and also with its owners.