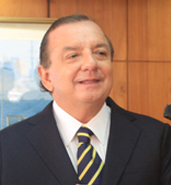 Álvaro Noboa inherited1% of his wealth

Ecuador’s greatest fortune – US$ 1.2 billion amassed by Luis Noboa Naranjo – was reported by Forbes magazine from 1997 to 1999, when Álvaro Noboa was included in its lists, though he has not been reappeared since. This could be due to the share distribution agreements, although Alvaro Noboa, cited by the publication in 2003, estimated his wealth to be around US 1 billion.

After the death of Luís Noboa in 1994, his widow, Mercedes Santistevan, assumed control of Fruit Shippers, the family’s banana exporting business.

After years of litigation with Santistevan and the Noboa sisters that, according to Forbes, cost $20 million, Alvaro Noboa is finally at the helm of the business.

The majority of inherited fortunes, according to Guillermo Arosemena, an Ecuadorian economic analyst, tend to be split up over the years. In Alvaro Noboa’s case, he has continued his father’s strategy of applying “vertical integration”, that is to say, to depend as little as possible on third parties in order to wield greater decision-making power over the business. The Noboa Group controls the whole process, from banana cultivation to the manufacture of cardboard boxes for packing, to the shipping facilities in which goods are exported. Moreover, he is the owner of Industrial Molinera, Automotriz Corporation and a further 114 companies all established by Luís Noboa.

However, Alvaro Noboa, early candidate for the 2006 Presidential race, does not consider himself a millionaire by inheritance. “Even though my opponents have referred to me as “the heir”, I only inherited 1% of my wealth. The rest I have either created or acquired through my own efforts” writes Noboa in his web page.