On May 25th, 2012,  Alvaro Noboa organized a popular national assembly and invited all the political leaders from other political parties, public service officers, union leaders, public and private organizations, among others.

The result of this call was the assistance of over 3.000 citizens that came from different regions of Ecuador in order to give their support to the PRIAN leader. All of the attendants were filled with happiness and energy when they heard Alvaro Noboa’s proposal for creating a better Ecuador. 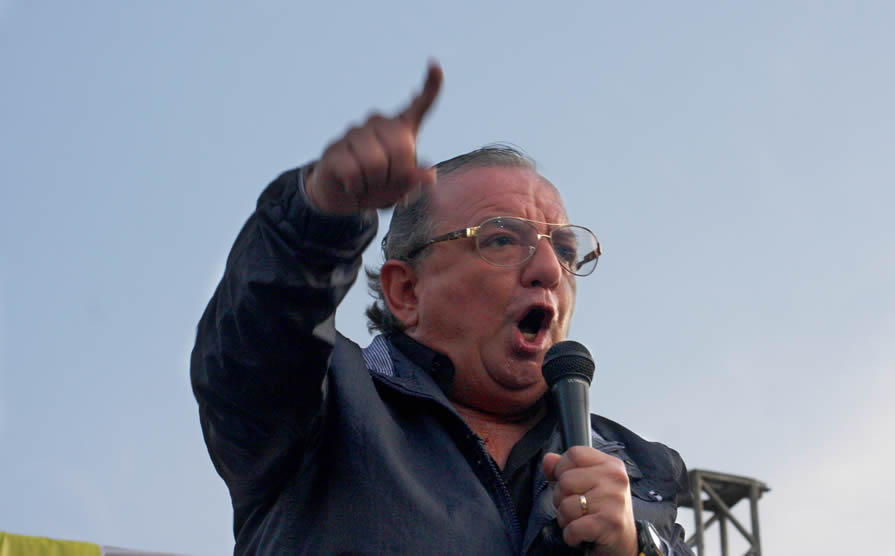 Alvaro Noboa giving a speech at the Popular Assembly, 2012

Here is the transcript of Alvaro Noboa’s Speech:

The Ecuadorians have grown tired of being a third world country, in poverty and in the abandonment that are living. My revolution, that begins today, will make all Ecuadorians rich, middle class citizens at a level as the one in developed and successful countries.

All Ecuadorians will finally have concrete, comfortable, and modern housing, their own car, a high level job, good food at good prices, education equal to modern countries where all citizens have a professional career or an art or a skilled trade.

Ecuadorians will enjoy modern health services, first world social security. They will have protection against crime wherever they go.

The country has petroleum, it is today at the best prices of the history, but backwardness and poverty still remains in Ecuador. Economist, Rafael Correa, has failed in his goal. What Economist Rafael Correa has known in his whole life is how to generate poverty and he still does it today.  The country persists to be in bad conditions.  In the way Fidel Castro does it in his country, in the way Chavez does it in his country, and we will not allow it to happen anymore.

I, Alvaro Noboa, have studied all my life, I’ve become a profesional. I was the best student and I work as a poor man does it: I have two shifts a day. My first shift from 9 am to 3 pm, my second shift is from 3 pm to 10 pm. My pride is not on my wealth, my pride is in my work, and in my love to Ecuador.

I’ve created companies and jobs in Ecuador and around the world too. Thanks to my leadership there are employees in Croatia, Serbia, Belgium, New Zealand, Esmeraldas, Los Rios, Guayas and in all provinces of Ecuador, whose livelihood depend on the machines of these companies, whose livelihood depends on the trade that we generate here at Noboa Group.

I, Alvaro Noboa in all my life have created wealth, created businesses, jobs in Ecuador and in the whole world and I am still doing it today. My revolution will change the bad situation of Ecuador, and we will achieve what other countries with fewer natural resources than ours have achieved thanks to economic policies like the ones that I propose and raising the education level of all of us. So that each and every one of you can work in modern factories, so that each and every one of you can have cars, can have education, security, can have a cement house. So you can proudly say: We are Ecuadorians and are worthy.

It is a failed revolution the one that leads economist Correa. It is like to that of Fidel Castro in Cuba that have only led to migrate much of its population. The same way as it happens with Fidel Castro in Cuba, this has led us to have nothing, nothing and nothing for living.

My revolution will succeed in making everybody rich in Ecuador and live with dignity.

Do not be afraid because God and the country is with us, let’s struggle all together till the final victory.

We have two hundred years of republican history, we have on us blood that runs everywhere since independence in 1800, but what finally happened? What happened after Bolivar and Sucre, and Olmedo sacrificed themselves in that revolution? Nothing happened and there is nothing worse in the history of a country than that. Then came the liberal revolution, back in 1900, Alfaro was sacrificed and passed away, hundreds of thousands of Ecuadorians were killed, and what finally happened? Nothing happened, and there is nothing worse in a country than that.

So we must learn from history, and I will give historical examples where in 10 years something did happen. It was after the Second World War when Germany was destroyed, its buildings, its banking, its machinery was destroyed, millions of Germans were killed, but with a proper plan of economic recovery, thanks to a proper investment plan, which at that time was made by the United States, with the famous Marshall plan, thanks to the German spirit, Ecuador has plenty of it, they had the opportunity to recover in 10 years their country, and in 20 years they turned it back to the Germany that they have today: The most modern European country where there is the richer and stronger middle class in Europe. So, yes we can Ecuadorians.

So why, Ecuadorians, it happens that Norway has the same amount of petroleum  that Ecuador has, that Venezuela has, and it happens that Norway has a population with one of the best living standards in Europe. I invite you to search this on the internet. I invite you to look it up in your books. It has its monetary reserve invested in the whole world, because of the surplus money it has. Its 5 million habitants have a car, everyone has health, all of them are professionals, everyone has home, all have security. Then, yes we can!

Why, Ecuadorians, having gold, copper, silver, oil, marine resources, having one of the best campuses, the best tourist places, do we have to be at the bottom of the economy along with Bolivia, Venezuela. Meanwhile in Chile, that has neither a third of what we have,  people live better, the country is richer and all of them have home, cars, all are educated, they all have health, everyone gets what rich modern middle class offers. Why is it, Ecuadorians? There are places like Singapore where with 15 or 20 years of good government policies, they have became one of the richest centers in the world.

They all have changed due to a correct economic policy that I think to apply in my next presidential post. All of them changed because they had a leadership that brought the country to unite in one and they worked together to carry out the revolution that I will lead, in which you will participate. Yes you can, Ecuadorians! Rich people are not the ones to blame.

I’m not a rich who throws the money. I am rich that invests and loves you more and more. The best way to love Ecuador is crawling up its economic level. The best way to love Ecuador, is not doing charity, not giving presents and gifts. The best way to love Ecuador is turning each Ecuadorian in a modern professional; is making all Ecuadorians a middle class man and to be able to do so they need to educate themselves. So that means that the one who is a banana trader can be the best banana trader, the one that is an industrial, can be the best industrial, since the centers of study that I am thinking of can develop the best people of Ecuador for every $ 50,000 we invest in the education of each Ecuadorian. Alone they will produce $ 500,000. Therefore there is no better deal for the Ecuadorian education, if you invest in yourself and in your children you will win 10 times through their life thanks to this investment.

I have 15 days… 15 days in a membership campaign and I was given yesterday a survey that says that although I have not campaigned in 5 years, and with just 15 days campaigning, I’m in second place after Correa. I will lead the opposition to whom I invite to join me in order to have one single candidate against Correa and to bury the citizen’s revolution and start the modern revolution I am proposing.

I want to thank the representatives of the 24 provinces of Ecuador that have left their homes on a holiday to come and hear my words and to receive the hug that I have for you.

I want to thank each and every one of the farms, all the peasants of Hacienda Mercedes, Clamentina, Bonita and all the estates of the group, who are here.

I want to thank these young people, youth divine treasure you’ll be the next to lead this next victory, you’ll be the ones that will be there ruling with me to transform and perform the revolution that I propose.

I want to thank all of those who have come on their own today to join this cause, I have also made an invitation to the leaders of each and every one of the other parties to know that here you have a wide open door to create a single front against our great oppositor, that one of citizen’s revolution. I want to thank the employees of every business.

I want to thank Esmeraldas.

I want to thank Los Ríos.

I want to thank Manabí.

I want to thank Santo Domingo.

I want to thank El Oro.

I want to thank Guayas.

I want to thank Carchi.

I want to thank Imbabura.

I want to thank Pichincha.

I want to thank Cotopaxi.

I want to thank Chimborazo.

I want to thank Tungurahua,

I want to thank Azuay, Cañar, Bolívar, Loja, Galápagos and everyone from the Amazon region that have  atended this meeting today.

I want to thank the medical brigades.

I want to thank the leadership of the PRIAN party.

And I want with youths and with all of you, to create a new leadership that will be the one that next to me, by car, on foot, by horse, or however, will do the final revolution in which we can finally bring Ecuador to the first level developing world.