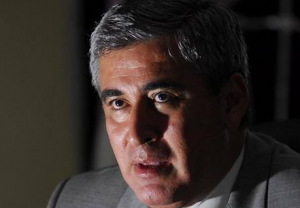 In a statement published by newspapers El Universo, El Comercio and Extra, in their editions of Tuesday, September 3, Dr. Juan Vizueta Ronquillo, on behalf of the attorneys of Bananera Noboa, addresses the country through the publication of a letter sent to the officials of the Internal Revenue Service (SRI, for it Spanish acronym) South Coastline division: Economist Juan Miguel Aviles Murillo, Special Regional Director-Collector; Attorney Dorian Ivan Rodriguez Silva, Regional Director, Regional Chief of Collections and Ad Hoc Secretary for the Foreclosure Proceeding Nº RLS-03855-2012; and Doctor Carlos Alberto Ordeñana Carrion, Tax Warehouse Keeper of Foreclosure Proceeding
Nº RLS-03855-2012 (Babahoyo), to whom they requested to refrain from all interference within the foreclosure proceeding Nº RLS-03855-2012.

The letter explained the legal actions that determine the suspension of the foreclosure proceeding Nº RLS-03855-2012 and the consequences of acting against the law.

“It is not effective with regard to my client, because they were not notified and there was a de facto suspension”, says the statement when explains that all the orders carried out after the submission of the direct claim, which suspended the foreclosure action, are of absolute nullity.

The attorneys, after stating the legal arguments, request to the officials of the SRI South Coastline Division, to refrain from all interference within the foreclosure proceeding Nº RLS-03855-2012 , neither consent or authorize enforcement proceedings ordered through a null and void application.

It also indicates the non-respect of the established regulations and the recurrent jostling of Bananera Noboa’s rights, for what, legal actions, protected by law, will be taken.

The letter concludes saying that “now the real legal battle begins, in all the possible headquarters, for the SRI to prove with legal arguments, and not supported by the whim of two or three officials, why, all the other banana companies pay less than one million dollars in taxes and solely, Alvaro Noboa, is forced to pay more than one hundred and three million dollars”. 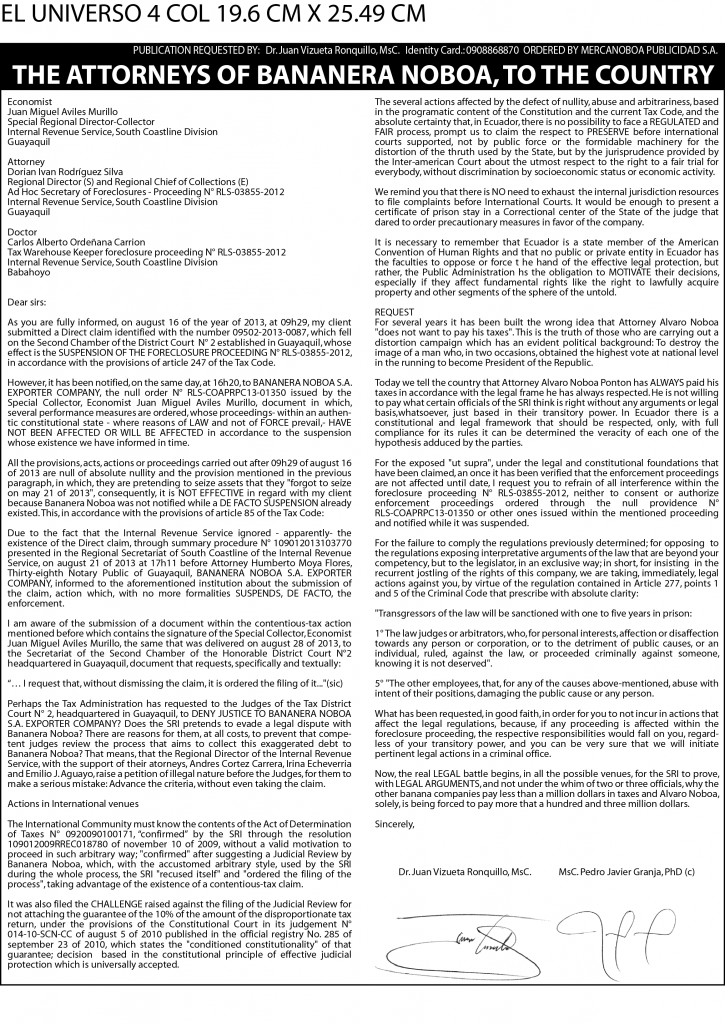 As you are fully informed, on august 16 of the year of 2013, at 09h29, my client submitted a Direct claim identified with the number 09502-2013-0087, which fell on the Second Chamber of the District Court N° 2 established in Guayaquil, whose effect is the SUSPENSION OF THE FORECLOSURE PROCEEDING N° RLS-03855-2012, in accordance with the provisions of article 247 of the Tax Code.

However, it has been notified, on the same day, at 16h20, to BANANERA NOBOA S.A. EXPORTER COMPANY, the null order N° RLS-COAPRPC13-01350 issued by the Special Collector, Economist Juan Miguel Aviles Murillo, document in which, several performance measures are ordered, whose proceedings- within an authentic constitutional state – where reasons of LAW and not of FORCE prevail,- HAVE NOT BEEN AFFECTED OR WILL BE AFFECTED in accordance to the suspension whose existence we have informed in time.

All the provisions, acts, actions or proceedings carried out after 09h29 of august 16 of 2013 are null of absolute nullity and the provision mentioned in the previous paragraph, in which, they are pretending to seize assets that they “forgot to seize on may 21 of 2013”, consequently, it is NOT EFFECTIVE in regard with my client because Bananera Noboa was not notified while a DE FACTO SUSPENSION already existed. This, in accordance with the provisions of article 85 of the Tax Code:

Due to the fact that the Internal Revenue Service ignored – apparently- the existence of the Direct claim, through summary procedure N° 109012013103770 presented in the Regional Secretariat of South Coastline of the Internal Revenue Service, on august 21 of 2013 at 17h11 before Attorney Humberto Moya Flores, Thirty-eighth Notary Public of Guayaquil, BANANERA NOBOA S.A. EXPORTER COMPANY, informed to the aforementioned institution about the submission of the claim, action which, with no more formalities SUSPENDS, DE FACTO, the enforcement.

I am aware of the submission of a document within the contentious-tax action mentioned before which contains the signature of the Special Collector, Economist Juan Miguel Aviles Murillo, the same that was delivered on august 28 of 2013, to the Secretariat of the Second Chamber of the Honorable District Court N°2 headquartered in Guayaquil, document that requests, specifically and textually:

“… I request that, without dismissing the claim, it is ordered the filing of it…”(sic)

Perhaps the Tax Administration has requested to the Judges of the Tax District Court N° 2, headquartered in Guayaquil, to DENY JUSTICE TO BANANERA NOBOA S.A. EXPORTER COMPANY? Does the SRI pretends to evade a legal dispute with Bananera Noboa? There are reasons for them, at all costs, to prevent that competent judges review the process that aims to collect this exaggerated debt to Bananera Noboa? That means, that the Regional Director of the Internal Revenue Service, with the support of their atorneys, Andres Cortez Carrera, Irina Echeverria and Emilio J. Aguayo, raise a petition of illegal nature before the Judges, for them to make a serious mistake: Advance the criteria, without even taking the claim.

The International Community must know the contents of the Act of Determination of Taxes N° 0920090100171, “confirmed” by the SRI through the resolution 109012009RREC018780 of november 10 of 2009, without a valid motivation to proceed in such arbitrary way; “confirmed” after suggesting a Judicial Review by Bananera Noboa, which, with the accustomed arbitrary style, used by the SRI during the whole process, the SRI “recused itself” and “ordered the filing of the process”, taking advantage of the existence of a contentious-tax claim.

It was also filed the CHALLENGE raised against the filing of the Judicial Review for not attaching the guarantee of the 10% of the amount of the disproportionate tax return, under the provisions of the Constitutional Court in its judgement N° 014-10-SCN-CC of august 5 of 2010 published in the official registry No. 285 of september 23 of 2010, which states the “conditioned constitutionality” of that guarantee; decision based in the constitutional principle of effective judicial protection which is universally accepted.

The several actions affected by the defect of nullity, abuse and arbitrariness, based in the programatic content of the Constitution and the current Tax Code, and the absolute certainty that, in Ecuador, there is no possibility to face a REGULATED and FAIR process, prompt us to claim the respect to PRESERVE before international courts supported, not by public force or the formidable machinery for the distortion of the thruth used by the State, but by the jurisprudence provided by the Inter-american Court about the utmost respect to the right to a fair trial for everybody, without discrimination by socioeconomic status or economic activity.

We remind you that there is NO need to exhaust the internal jurisdiction resources to file complaints before International Courts. It would be enough to present a certificate of prison stay in a Correctional center of the State of the judge that dared to order precautionary measures in favor of the company.

It is necessary to remember that Ecuador is a state member of the American Convention of Human Rights and that no public or private entity in Ecuador has the faculties to oppose or force the hand of the effective legal protection, but rather, the Public Administration hs the obligation to MOTIVATE their decisions, especially if they affect fundamental rights like the right to lawfully acquire property and other segments of the sphere of the untold.

For several years it has been built the wrong idea that Attorney Alvaro Noboa “does not want to pay his taxes”. This is the truth of those who are carrying out a distortion campaign which has an evident political background: To destroy the image of a man who, in two occasions, obtained the highest vote at national level in the running to become President of the Republic.

Today we tell the country that Attorney Alvaro Noboa Ponton has ALWAYS paid his taxes in accordance with the legal frame he has always respected. He is not willing to pay what certain officials of the SRI think is right without any arguments or legal basis,whatsoever, just based in their transitory power. In Ecuador there is a constitutional and legal framework that should be respected, only, with full compliance for its rules it can be determined the veracity of each one of the hypothesis adduced by the parties.

For the exposed “ut supra”, under the legal and constitutional foundations that have been claimed, an once it has been verified that the enforcement proceedings are not affected until date, I request you to refrain of all interference within the foreclosure proceeding N° RLS-03855-2012, neither to consent or authorize enforcement proceedings ordered through the null providence N° RLS-COAPRPC13-01350 or other ones issued within the mentioned proceeding and notified while it was suspended.

For the failure to comply the regulations previously determined; for opposing to the regulations exposing interpretative arguments of the law that are beyond your competency, but to the legislator, in an exclusive way; in short, for insisting in the recurrent jostling of the rights of this company, we are taking, immediately, legal actions against you, by virtue of the regulation contained in Article 277, points 1 and 5 of the Criminal Code that prescribe with absolute clarity:

“Transgressors of the law will be sanctioned with one to five years in prison:

1° The law judges or arbitrators, who, for personal interests, affection or disaffection towards any person or corporation, or to the detriment of public causes, or an individual, ruled, against the law, or proceeded criminally against someone, knowing it is not deserved”.

5° “The other employees, that, for any of the causes above-mentioned, abuse with intent of their positions, damaging the public cause or any person.

What has been requested, in good faith, in order for you to not incur in actions that affect the legal regulations, because, if any proceeding is affected within the foreclosure proceeding, the respective responsibilities would fall on you, regardless of your transitory power, and you can be very sure that we will initiate pertinent legal actions in a criminal office.

Now, the real LEGAL battle begins, in all the possible venues, for the SRI to prove, with LEGAL ARGUMENTS, and not under the whim of two or three officials, why the other banana companies pay less than a million dollars in taxes and Alvaro Noboa, solely, is being forced to pay more that a hundred and three million dollars.