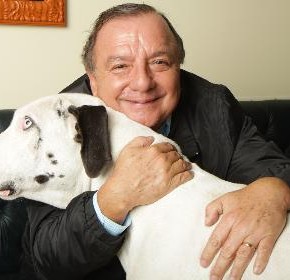 I’VE RETURNED TO THE COUNTRY TO FACE THE POLITICAL PERSECUTION

In an interview conceded to Expreso Newspaper, Álvaro Noboa stated that his return to the country is an act of responsibility and a commitment to Ecuador.

“I have a clear conscience.  And  I feel very good because I have received congratulations from many citizens who see my return as an act of bravery.”

Given the country arrest, that prohibits him from leaving the country, Noboa stated, “I am conscious of being a prisoner in my own country. But, despite all that, I decided to return to face the situation.”

Referring to the accusations by the IRS, he stated, that they were false and unfair, all you have to do is look at my tax returns, he said.

“There are many citizens who are aware that what they are demanding is an abuse. They are trying to get 140 times more from us than what Dole alone paid in 2005.

Noboa once again insisted that he is the largest taxpayer in the country.  “My sister, Isabel, Eljuri and Fidel Egas are bigger millionaires than I am. And I pay more taxes than them.”

‘My sister, Isabel, Ejuri and Fidel Egas are bigger millionaires than I am. And I pay more taxes than them.’

– Why did you return to the country?

– Because it’s my responsibility.

– With Ecuador. I had to withstand the political persecution.

– Demanding you pay all your taxes is persecution?

– And were you scared?

– I have a clear conscience. I feel very good because I have received congratulations from many citizens who see my return as an act of bravery.

– But now you can’t leave. Wouldn’t it have been better to remain living in the comforts offered abroad?

– I am conscious of being a prisoner in my own country. But, despite all that, I decided to return to face the situation.

– And to return as a presidential candidate once more, even though you could lose again?

– I’ll remind you that I won the first round in 2006, against the current President of the Republic. I have been a finalist on three occasions, and when I ran against Jamil Mahuad, I won, but they stole it from me.

– Did you come because of some kind of political deal to neutralize the other opposition candidates?

– By no means. What political deal could there be in the same state of indefensibility and persecution? I came because many citizens asked me to stand again for the elections, because they consider there to be much to do in Ecuador.

– Even though President Correa is leading by far in the polls?

– Yes, though the campaign hasn’t even started yet.

– Do you really believe that you can get to the second round and beat Correa?

– If you win, would you change everything that’s been done by the current government?

No, instead I would strengthen President Correa’s excellent social work.

– You agree with Correa?

– In the social arena, yes. I am in agreement with his handling of the vouchers.  I applaud his work in highways and healthcare, as well. He’s done a great job. It would be absurd to deny that.

– So, what sense does it make to run for President of the Republic if the actual president is doing everything well?

– No, I didn’t say that. I applaud his social work, which is undeniable. But I criticize his inability to conquer poverty, that he has not generated production, that he doesn’t respect freedom of expression and that there is no autonomy of powers, especially judicially.

– And you would be respectful of the freedom of expression and would maintain distance from the other functions of state?

– I would do that, and much more. I would bring thousands of private companies to the country to generate jobs, to raise the quality and technical knowledge of the people and, as a consequence, to support the ability of workers to leave poverty and to form part of the middle classes thanks to an honorable salary.

– According to you, therefore, Correa’s failure is related to generating productivity.

– Ecuador’s problem is that there is so much poverty wherever one looks. Esmeraldas, Manabí, the indigenous Sierra, etcetera. Correa has not eradicated poverty. That is very clear.

– At bottom, we are suspicious. We could just as well believe that you returned in order to become a candidate and to neutralize the other Presidential aspirants…

– That’s not it. I am in a clear second place in the polls, after Economist Correa, who still has an ample advantage. And I am at least four or five points of those who come after me.

– So, do you think you can bring that anti-Correa vote together?

– Yes, indeed, yes. But even if Correa has a strong showing, if you put together all the other tendencies, anti-Correa feeling is more than 60%.

– That would be your revenge. To win over him, in the second round, who took it from you in the same way in 2006.

– Although I am not the vengeful kind, it’s obvious that those who are anti-Correa now are not going to change their mind in the next months. So that possibility is real.

– Does candidate Guillermo Lasso appear a strong adversary to you?

– You don’t believe that Lasso is a candidate who can fight you for second place, besides being the most visible of the opposition?

– I don’t think so. I say it with respect, but firmly. They say he has spent between $7 million and $10 million dollars when he began his campaign, and that created a lot of impact among a certain group of Ecuadorians. But not anymore. And on top of that, the Auki Tituaña, instead of favoring him has weakened him.

– The proposal to raise the voucher to $50 dollars was a good move, or a mistake by Lasso?

– A serious mistake. It damages the bank’s image. It probably had a big impact on him and all his banking colleagues, and it automatically produced a lowering in the value of Ecuadorian banks, because no one wants to buy a bank here because they are afraid that the Government will intervene in their profits and is ready to buy them.

– Do you think you might at some time join forces with him?

– I visited with him and invited him, but just like Lucio Gutiérrez, his response was that he wanted to be the Presidential candidate, and that Anabella Azín be the Vice-Presidential candidate. I can’t accept that because my wife, Anabella, is very popular and has huge draw among voters.

– You didn’t consider about integrating behind one sole right-wing candidate?

– There are many examples throughout the world of people with a lot of money and yet with an ideology that favors the poor. The Kennedys have been center-leftist. Ted Turner, the owner of CNN is center-left.

– What does it mean to be center-left?

– To be with the poor, to generate jobs, to raise their standard of living. Once, being a leftist leader at university, I even ended up in jail under the Rodríguez Lara dictatorship.

– What have you learned from your failures?

– To never rest on my laurels. When I beat Correa in the first round of 2006, I failed. I didn’t know what to do with that many votes, and I allowed the vote to slide in the second round.

– The lesson being not to become over-confident….

– That’s the lesson. In politics, one has to give one’s best effort every day, and this time I am going to give it my all to reach the Presidency.

– But your rivals attack you for your fame for not having paid taxes. They say that you are a banana-producing exploiter…

– That is false. You can see my tax returns and see that that [the accusation] is unfair. There are many citizens who are aware that what they are demanding is an abuse. They are trying to get 140 times more from us than what Dole alone paid in 2005.

– You have said that you are not the owner of the company in dispute. Where does your money come from, then? What do you live from? Your house is an demonstration of your economic power…

I live very well thanks to the salary that I earn in the companies that I administer. They are trusteeships and other administrative structures that my father left. Others are the rich of Ecuador.

– Who are those others?

– My sister, Isabel, Mr. Eljuri, Mr. Fidel Egas…. I have to say, that as a personal taxpayer, I pay more taxes than any of those. I definitely pay more than Guillermo Lasso.

– What will be your electoral strategy this time, if your aim is to beat Rafael Correa?

– To achieve that there is a second round and to bring together the anti-Correa vote. In that way, I will become President of the Republic.

Published in Expreso Newspaper of Ecuador