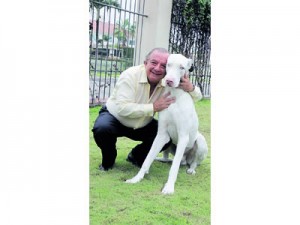 “I know how to conquer poverty.”  Guayaquil’s Extra Newspaper headed an interview with this phrase repeated during the campaign of businessman and politician, Álvaro Noboa, PRIAN List 7 candidate. The interview emphasizes his principal strategy for achieving his plan.

Extra journalist Vicente Chonillo Yanqui tells the story of the moments prior to a campaign tour by the candidate and brings out little-known family details, like the game of ping pong he plays with his wife and running mate, Annabella Azín in their home.

It also reveals that he plays with a white Great Dane called Goliat, and that before going out to tour the working class zones of Guayaquil in order to spread the message of his plan of government, he changes his elegant shoes for some used tennis shoes.

During the interview, the journalist asked why he was once again a candidate for the Presidency and the response was: “Simple, because I am just as much a human being like anyone else. I believe in God, I think and feel that I should fight to become President of the Republic in order to conquer the poverty of this country.”

Álvaro Noboa explains his “Plan Noboa” that will create employment via actions that will attract foreign investment. To do so, he will generate well-being and judicial guarantees, and lower taxes on income so that businesses will find the country’s market attractive that now is sustained by only a few agricultural products and petroleum. “This plan will bring an end to poverty,” he stated.

He explains that with tax stimulus and judicial guarantees, he intends to attract at least a thousand large companies similar to Cervecería Nacional [National Brewery] or multinational cellular companies, in which there will be openings to strengthen the middle classes and to help the poor. He indicated that employees had to become technologically knowledgeable; that they had to be taught to improve in their areas of work. “Only in that way can that person be paid a better salary, as they are no longer just one more collaborator in the business, but rather a specialist in their area. That’s how it should be done,” indicated Noboa, who, planting himself firmly against a table with his index finger, pointed out that nobody was going to teach him anything about making money and creating jobs.

During the interview he also stated that during his government access to university would be free so that each person could choose the profession they preferred and not what was demanded of them. Afterwards, he analyzed and clarified other points of his plan to end the class struggle.

He declared that recent governments had stated that the businessman is the enemy of the worker. “It’s the most absurd thing,” pointed out Noboa, who says that “establishing and investing means giving opportunities for development to human beings,” and he asked, “what bad is there in a group of people providing jobs and showing others the road to success? I believe that without hate everyone can live in peace.”

He stated that he would maintain the Human Development Voucher ($50 dollars)  and that social security in the area of healthcare should be broadened and improved.

Álvaro Noboa also highlighted his plan to strengthen and increase the number of micro-enterprises, a system that he has been carrying out with the help and motivation of the New Humanity Crusade Foundation, which donates resources and tools so that the most needy can open different kinds of businesses.

The interview with Extra includes the interviewee’s opinion that, from the first day that he would be President, “the improvement will be felt” and that if he doesn’t end up being the winner of this electoral race, he will continue to try to be President because he can’t allow himself to close his eyes to the poverty in which the citizens live.

The journalistic story recalls that Noboa was a Presidential candidate for the Roldosista Ecuatoriana Party (PRE) in 1998, and for the PRIAN in 2002, 2006 and 2009; it describes how he interacts with the people during his tours; and closes with a synthesis of the talk: “The people need to be taught how to fish, to provide them with an example and security, and I know how to do that. I have demonstrated it and I will continue doing so until conquering poverty.”