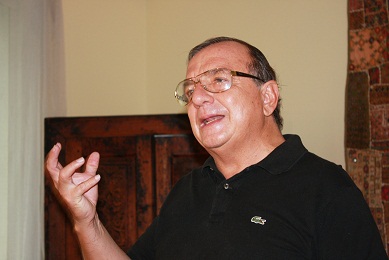 Today at a press conference, Alvaro Noboa spoke to the Ecuadorian people which are close to take part of a referendum on May 7th.

Alvaro Noboa stressed that the president is on bad terms with the entire political class, the middle class that now borders on poverty. “With the press. He prosecutes them, he threats them, he expropriates them and who knows what other abuses has suffered the press in this country,” he said.

Noboa said that Correa has had troubles with his own brother, who is campaigning against him. He has fought “with a great number of slums in Ecuador, with most employers, with neighboring countries, with the United States as he expelled its ambassador,” he said.

Noboa called Ecuadorians to give their vote for the no option in the referendum. “Do not be discouraged, keep the resistance. It’s time for Ecuador’s rebirth to that Ecuador that we have always dreamed of.”

“Lets keep together and brave…the indigenous, MPD, independent movements, the people who have suffered so much, police, teachers, all working together till end, so that the no option can succeed this Saturday.”