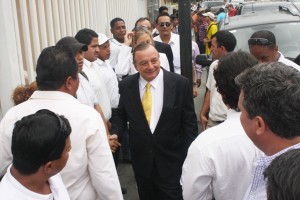 Within a few hours of his arrival to the country, Alvaro Noboa, when accepting the candidacy proposed by PRIAN, said:

“I have decided to return to Ecuador, despite the economic and personal persecution which has banned me from leaving the country, but I’m not going anywhere but Quito, to assume the Presidency.”

Noboa expressed that he made the decision with his family: “is just another step in my life as a patriot and a catholic, to serve my country, which I have been serving from a very young age.”

He pointed out the vast social labor carried out by the New Humanity Crusade Foundation for more than 30 years, which her wife, Anabella, joined.

“We have been providing health care, during all these years, to more than a million ecuadorians, who have received free medicine and free medical care trough the Alvaro Noboa medical brigades.”

“Long before the Government, the Foundation I preside, has being giving support to the people with special capabilities.”

The social labor carried out by the New Humanity Crusade, added Noboa, has been extended to education, providing schools with computers, which are a vital tool for studying.

“All ecuadorians should have a computer to be able to develop themselves within the academic, professional and business spheres”.

Alvaro Noboa also emphasized, the support given by the Foundation to the development of micro enterprises across the country.

May God be with you, Ecuadorians. I arrived a few hours ago in order to accept the candidacy, which I accept at this moment, for President of the Republic of Ecuador for the PRIAN Party, which, together with Alianza País, are the two parties with the greatest number of affiliations, and the two biggest parties in Ecuador.

I took the decision to return to Ecuador despite the economic persecution, despite the personal persecution by which they have prohibited my leaving this country.  But I’m not going anywhere. I’m going to Quito! To the Presidency of the Republic.

I have taken this decision together with my family. It’s nothing more than one step more in my life as a patriot, as a Catholic, to serve this country; something I’ve been doing from a very young age.

More than 30 years ago, I began, via the New Humanity Crusade Foundation, to attend to the health of Ecuadorians; a struggle that my wife, Dr. Anabella Azín, also joined. Over the years, we have attended to many more than a million Ecuadorians, who have been given free medicine and free medical attention via the Álvaro Noboa Medical Brigades.

We have developed micro-enterprises across the country; we have helped the handicapped for more than 30 years now; well before the government began to do so. We have served the country like patriots, both my wife and I, and in 1996, I served as President of the Federal Reserve, bringing the monetary reserves to their highest historic level. I lowered interest rates, and strengthened the sucre, the currency at that time.

I have also been an Assembly Member in Montecristi, and ran for President of the Republic, and won, in the year 1997. I mourn in my heart the electoral fraud committed by those who took the country to ruin in the year 2000. We won the first electoral round in 2006, and in the second round my opponent won, thanks to the help of the MPD, the PRE, of Pachakutik, the freedom to vote that León Roldós of the RED gave to Sociedad Patriótica, all currently enemies of the regime.

I am not an enemy of the regime. The regime is my enemy.

I aim to serve the country, without instigating violence or divisiveness. I forgive this regime for all the damage that it has done to me and to my family, and I can’t imagine, out of rancor, failing to recognize the victories in the social realm that have been achieved by this regime. I respect and appreciate them.

The Poverty Voucher will be respected; the voucher which has been strengthened under this regime.  The construction of roads will continue under my government with the same or greater intensity that the regime has undertaken them. Our health programs will continue to go on and will increase the number of citizens that receive them in accordance with the programs of this regime. Where we are going to differ from this regime is in the economic area.  Under my government, we will attack the three biggest evils that today Ecuadorians recognize to be their greatest enemies:  unemployment; the economic crisis; and the crime that plagues Ecuador.

I am planning to carry out the lessons being taught to us by China, which has, over the last 10 years – thanks to its program of free enterprise, to its international business contracts, to its openness to investors, to its judicial guarantees – which has achieved – just like I envision for Ecuador – that a great part of its population, more than 300 million Chinese  now have what I want for all Ecuadorians:  a cement construction house, a car, a good job with a salary of $1,000, $2,000, and even $3,000 dollars a month, and a high level of education, whether technical or university.

That will be the method, which has been proven in China, in Chile, in Singapore, in South Korea, that will achieve poverty in Ecuador finally being eliminated, and we will do it without creating enemies, forgiving today this government all the harm that it has done me and uniting all of Ecuador, so that with peace and fortitude, we can create a new country of which we can feel proud, of which we can be happy, of which we can feel secure living in this grand country. For this, Ecuadorians, I invite you to continue with the success of this government and to achieve new successes in the economic and the social arenas and to be able to say, with pride: Glory to God and Long Live Ecuador!