The Ecuadorian political leader Alvaro Noboa, in statements during a press conference in June 2012, warned all Ecuadorians about future economic problems Ecuador would face since the budget of the current government depends only on the inputs generated by the sale of oil. 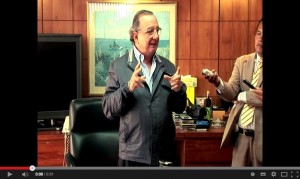 Declaration made in June 2012

In my government, I will not depend on oil, I want a global economic development, as in the countries of first world, where there is industry, commerce, agriculture, tourism, fishing … everything that generates wealth. Not just one or two economic entries as here in Ecuador.