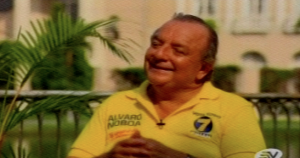 In an interview with Tania Tinoco, an Ecuavisa journalist, PRIAN List 7 candidate for President of the Republic,  Álvaro Noboa, said that his time had not ended because the time of poverty had not ended, and repeated that his plan for government would end poverty for Ecuadorians.

“There are two million Ecuadorians who live on $50 dollars, and that is poverty. I have the Noboa Plan, an economic development plan for Ecuador. I want to bring a thousand companies that will produce all the products that you buy that are Chinese, and produce them here in Ecuador.”

He restated that his project would attract a thousand large companies to whom he would give tax incentives, judicial guarantees and a rate of 10% taxes on income and that they would generate employment and wealth

In response to the journalist’s question regarding a possible pact with the current President of the Republic, he assured listeners that any rumor about a pact with Rafael Correa was false and in response to a further question by the interviewer, he restated that he had no conflicts nor pending cases with any of his siblings. Regarding Correa’s legal situation, and that of other former Presidents of the Republic, he confirmed that the justice system should resolve them, as is fitting.

He explained that his plan would encompass a series of political and economic reforms that would allow hourly work, but that would respect and maintain the current labor system with social security and work days; the elimination of some taxes like the 5% tax on outgoing currency, the 2% tax payable in advance on income, and other [cuts] that would stimulate national and foreign investment.

He did not reject the idea of disconnecting himself from his companies in various ways in order to dedicate himself completely to applying his plan for government.

Tania Tinoco:  Attorney Noboa, why should Ecuadorians believe that you are in this fifth Presidential campaign out of a true vocation of service?

Álvaro Noboa:  Because I have done so since 1998; because in 98, I won the elections. A great part of Ecuador voted or me, they believe in my proposals.

Tania Tinoco:  There is a theory that says that you are in this fifth Presidential campaign because of an agreement between you and the Rafael Correa government so that by being a straw man in this campaign the Correa government will not collect on your taxes.

Álvaro Noboa:  Look, Economist Correa has never met with me, there has never been any such agreement, we have never had a chat like the ones that you and I have had. Our ideologies are totally opposed, so this is a completely made up and false accusation.

Álvaro Noboa:  I did, until two years ago, and I had scarcely begun to say that I am the number one [tax payer] and they took the information off the web page. I, as an individual tax payer, pay $600,000 dollars in taxes annually, and I don’t know any other Ecuadorian, I have asked about other rich Ecuadorians, and there is no Ecuadorian who pays that as an individual.

Tania Tinoco:  What’s going on with the PRIAN? It became the biggest political force with 28 Representatives. In the last election they fell dramatically and only get 7 seats, and of those, there are only 2 left.

Álvaro Noboa:  In 2009, they changed the law at the last minute and one couldn’t do any electoral advertising. By taking us by surprise, the little advertisement space that they gave me, they gave me at 2 in the morning or at 3 in the morning, and there are still many people who never found out that I was running for President, and my wife, Annabella, for Vice-President.  I’m the one who drums up the votes and it’s up to me to drum them up like I did in 2006.

Tania Tinoco:  It wouldn’t be anything else? That the time of Álvaro Noboa is over?

Álvaro Noboa:  No because poverty is not over. I am going to say why poverty is not over. Before, there were a million Ecuadorians who were on the Voucher, and I am for the Voucher. Today, there are two million Ecuadorians who receive the Voucher. What’s clear is that there are two million Ecuadorians who are living on $50 and that is poverty. I have the Noboa Plan, a plan of economic development for Ecuador. I want to bring a thousand businesses to produce all the products that you buy now that are Chinese, or that many people buy that are Chinese, to produce them in Ecuador. To set taxes on income for those thousand businesses at 10%, in order to make Ecuador attractive as a center for investment.

Tania Tinoco:  In this Noboa Plan that you allude to in your hypothetical government:  What would happen to the Labor Code? You have spoken ahead, saying that you would regulate work per hour.

Álvaro Noboa:  There would be the two options. Hourly work but also normal salaried work, with a thirteenth, with a fourteenth, with all the social security affiliations. Those are the things from Economist Correa’s government that I will respect.

Tania Tinoco:  Would you create a new tributary reform in case you become President?

Álvaro Noboa:  That’s right. I would reduce taxes, above all for those products that are very attractive to the middle classes and for the poorer classes of Ecuador. Look , there is a 5% tax on outgoing currency. There are all the import taxes. There is VAT. There is 2% non-refundable tax on income in advance, that is to say, if you lose, there’s nothing.

Tania Tinoco:  If you become President, how would you manage the obvious conflict of interest that would exist between a President of the Republic and of businesses like the Bananera?  You are known internationally as “The Banana King.”

Tania Tinoco:  How much would a crate of bananas cost under your government?

Álvaro Noboa:  There are two elements there. The costs that on this day, with $6, are hardly covered, and the international competition.

Tania Tinoco:  There are two roads: putting the official price or liberalizing the price.

Tania Tinoco:  In the Guayaquil Chamber of Commerce debate, you said, literally, “In my government, I will invite all of Ecuador to participate in it. I don’t mind what political party comes. I will ask that all politically persecuted people return to the county. I will not persecute Economist Correa, nor would I have Interpol pursue him, nor would I sequester his apartment in Belgium, nor would I prohibit him from leaving the country.”  Do you confirm that?

Álvaro Noboa:  Look, that was an ironic way of stating that Economist Rafael Correa has not stopped doing all those things to me that I would not do to him. Because I am a Christian, I am a Catholic, I don’t believe in persecution, I don’t believe in revenge, but he has instigated a prohibition against leaving the country against me, he has sequestered goods from businesses in which I work, he has maligned my image. Because this issue, Tania, you who has followed me since 1998, was not an issue. There was no tax issue. It’s an invention of one year of only one company that has been disseminated by the government press, wasting millions of dollars on national channels with the final aim of discrediting me.

Tania Tinoco:  If you are not going to persecute Economist Correa, would you allow Abdalá Bucaram to return? Would you let Jamil Mahuad to return?

Álvaro Noboa:  It’s not up to me to do that. It’s up to the Courts and I am not going to interfere with the Courts.  What I am going to do is say clearly to the people of Ecuador that the Courts will not be violated by the Executive.

Tania Tinoco:  One last question and I am sorry if I touch upon personal issues, but you understand that a candidate for President of the Republic becomes of public interest. Are you reconciled with all of your family.  There are no more cases with your family? The suits against your siblings have ended.

Tania Tinoco:  So harmony reigns in the Noboa Family?

Tania Tinoco:  And with you against them?

Álvaro Noboa:  Not either. There were never any suits on my part against them. I am a happy man for many reasons. There is good communication between God and myself. I still have dreams and missions to fulfill.

Tania Tinoco:  And those dreams also imply being President of the Republic? And so, if you don’t win the fifth time, will you run the sixth time?

Álvaro Noboa:  I have said, smiling, that I have asked God to be able to live to 150 years old. Perhaps we will be, I at 150 and you at 150 interviewing me for the last Presidential race.