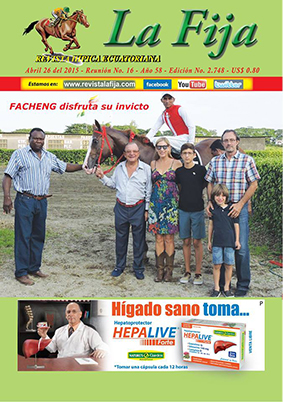 The equestrian magazine La Fija highlighted the victory of the horse of businessman Álvaro Noboa in the HARINA LISTA competition, held on Sunday, April 19 at the Samborondón Hippodrome.

This would be the third consecutive victory for Facheng, that came close to achieving the season record by scoring 1 minute 18 seconds 3/5 for the 1300 meters distance, according to the magazine, the same that qualifies the conduction of the national jockey Jose jurado as effective.

Businessman Álvaro Noboa Ponton received the trophy accompanied by his wife Anabella and his son Santiago, who were applauded and congratulated by enthusiasts of the horse racing, who filled up Buijo for this event in honor of Harina Lista.

Below a video of the great feat of Facheng: