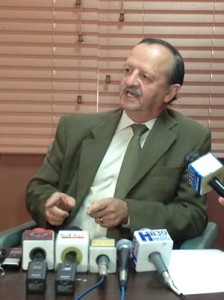 On Wednesday September 5th 2012, Fernando Alarcón, representative of Bananera Noboa, denounced the abuse by the SRI and the lack of guarantees in Ecuador. He also indicated that there is a political persecution to the company by the SRI and the Ecuadorian judiciary system.

Fernando Alarcón, in front of the media, emphasized the following points:

“SRI threats and persecutes, as usual, the judges that do not line up with their orders, disrespecting the independence of the judiciary, since this has been done to the Fourth Labour Court Judge who granted an injunction to Bananera Noboa to prevent the collection of an illegal and arbitrary tax charge. ”

“The injunction is to stop actions of the government, including the judiciary, to violate constitutional rights.”

“The constitutional rights of the company have been completely ignored in order for not qualifying in the demand, and preventing the initiation of the demand, and ordering to archive the process.”

“The District Tax Court and the National Court has not qualified the demand by ignoring the mandate contained in the judgment of the Constitutional Court; this is known as a  doctrine path of hidden facts as a judicial providence, and they are susceptible to an injunction.”