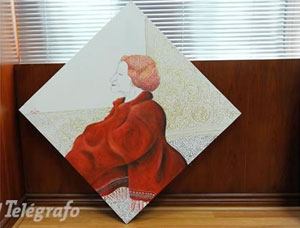 The Luis Noboa Naranjo museum, located in the downtown of Guayaquil would expand its events with the purpose of obtaining a larger number of art works.

The program would count with three foreign jurors and two teachers of national artwork.

On 2007, as a tribute to the Luis Noboa Naranjo museum, performed a biennial of homonymous painting with local artists and foreign residents of the country. Now the second edition is exposed as an international act.

The event will be on the museum Luis Noboa Naranjo, located in the downtown of Guayaquil that from this week would select the works of artists from 25 countries. According to the museum those who are selected would send their artworks to the biennial.

This year the program adopts the name of their main sponsor, II Biennial of Painting in Guayaquil from Álvaro Noboa. The director of the museum, Pablo Martinez, who also organized the first edition, pointed out that in space of approximately 4,000 square meters, would use the entire floor of the museum and the mezzanine to expose the paintings.

The reception would have windows where the material regarding the event and local exhibition are to be delivered. On the 2007 received 239 paintings from 150 painters local and foreigners.

Martinez pointed out that the awards are bigger, near the level from the International Cuenca Biennial -$ 20,000, 10,000 and 5,000 for the first, second, and third place respectively- the theme is free.

The paintings can be on any gender, but it must be placed on a traditional support, like wood, canvas, or cardboard.

Among the foreign participants the intervention of several teachers of the Bellas Artes school of San Marcos Florencia, a Panamanian who would tell the story of the toquilla straw hat with two paintings, that elaborate a pictorial narrative, a similar technique that Miguel Angell used to create the Sistine Chapel. Meanwhile Juan Manuel Ciria and Mateo Santa Marta from Spain confirmed the shipment of the works.

The administrators of the Luis Noboa Naranjo museum, Laura Calderon Chambers and Frida Idrovo, would receive the paintings of minimum size of 0,50 x 0,60 and a maximum of 1,60 x 1,60, until the 6 pm of Friday of March 26.

On March 27 they would select the three winners, three honor mentions and the paintings that would be exhibit from April 28 on the Luis Noboa Naranjo museum.

Martinez Rojas indicated that they have decided to make a catalog similar to a magazine with 80 pages, photos of the artworks and the winners to facilitate the reading for the public.

The restorer of the display at the biennial would be Jose Landin, who on 2009 was in charge of the restoration of multiple exhibitions that were presented at the Luis Noboa Naranjo museum.

He explains that the selected paintings that are awarded would be well allocated according to its theme.

The Web has been one of pillars for the diffusion of the new edition on the biennial, through the Web Sitewww.museoluisnoboanaranjo.com, besides of the virtual dialogues that are given among the communities of artists.

The event of this year would also have the support of the first honorary consuls of Canada, Belgium, Spain, and the consul of Portugal, the German Highschool, and the current director of the French Alliance academy of Guayaquil, besides the labor of 10 people that are responsible for the organization.