A few days ago, in the Federal District of Mexico, the seventh annual meeting of the recognized event called `Entrepreneurs of Latin America, Fathers and Sons´ was held.

Carlos Slim Helú was the businessman who hosted this event that brings together the most successful and prominent businessmen from countries like Mexico, Panama, Venezuela, Argentina, Colombia, Ecuador, Chile, among others.

Among the topics discussed by this group of entrepreneurs in this meeting whose peculiarity is the assistance of parents and children it was highlighted: World, Latin American and United States economy; problems, challenges, and proposals for the new civilization; genomics in health; international and institutional presence of Latin American companies: strategic partnership for United States and Latin America; investment opportunities and employment, among others.

Among the outstanding guests at the event were: Alvaro Noboa (representative of Ecuador, who has attended the event for twelve years), Gustavo Cisneros (Venezuela), Stanley Motta (Panama) and Alejandro Bulgheroni (Argentina). 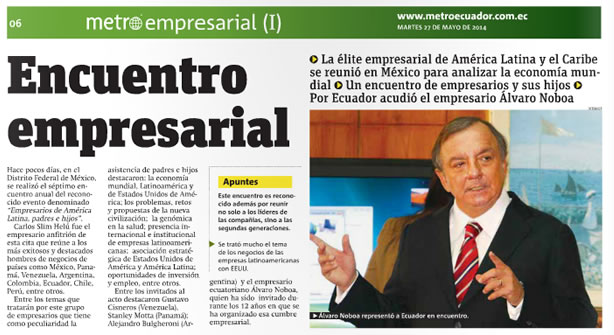