Last Friday, the expert on Environmental Rights, Robert F. Kennedy Jr. along with businessman Álvaro Noboa, offered a conference regarding the care of the ecosystem.

How would it be a sustainable world?, Which are the means to obtain it?, What role do the companies must play on this process?. This were the subjects discussed during the press conference, “The role of the industries regarding the environment protection,” was presented last Friday by Robert F. Kennedy Jr.

The event was held at Industrial Molinera, were Kennedy informed about the contamination and future consequences, and thus he suggested progressive changes because quick transformation would have negative repercussions on the world economy.

During the exposition he pointed out that United States spends over $ 1,3 million on oil subsidies, money that should be invested on the implementation of programs based on solar energy or wind energy, which are a power source that doesn’t contaminates the environment.

The expert on Environmental Rights informed that the several countries, like Barzil and Costa Rica acquired less contaminating technology, and this has helped them with a maintained growth even on this economic world crisis.

Kennedy insisted that the new ways of maintainable growth must overcome those companies that earn profits by contaminating.

During the dialogue the businessman and organizer of the event, Álvaro Noboa, pointed out that to aim a maintainable growth and prosperity new radical changes must be applied, changes that would allow the companies to learn to adapt themselves, innovate, and work while taking in consideration the protection of the ecosystem”. 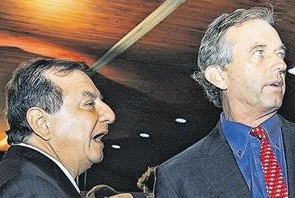 The world must search in nature an alternative to create new energy sources, since the imminent depletion of fossil sources like coil, oil and natural gas. The need to lower the environmental and economic costs has redefined the way to generate energy by major companies of the world.

Meanwhile Europe needed 15 years to replace the coil by geothermic energy, with the earths warming, the United States still depends of this resource and its disadvantages.

“There are rivers with high levels of mercury. Recent study’s show that the contamination in the country cost them over 150 thousand million of dollars every year due to carbon dioxide emissions on the atmosphere,” comment the renown North American environmentalist Robert F. Kennedy during a press conference on Industrial Molinera.

The nephew of the former president of the United States, John, F. Kennedy, arrived last Friday to Guayaquil, after being invited by businessman Álvaro Noboa Pontón. Together they offered other industries and workers a vision of the path that Ecuador must follow.

“In 40 years this planet would have over 30% of population. The bad news is that the resources are scarce and this would limit the consumption level needed,” stated Noboa, before admonishing the Ecuadorian businessman to invest on ecologic strategies.

Kennedy said that the best way to do this is not by imposing subsidies to electricity, or the fuels or any other services that without the help of the State would cease being cheap. We must invest in cleaner energy sources that nature offers for free. A clear example is your country, were millionaire projects are financed to secure wind energy sources, geothermic energy. This would strengthen the industry for electric car manufacturers, since the use energy with the ecosystem.

Meanwhile Manzano added “In Ecuador we do the opposite, there is an Executive Decree that forces the public institutions to use cars of national development and that is wrong because it is protecting an ineffective Automotive industry.”

According the environmentalist, in Ecuador a 49% of the energy comes from fossil fuel like thermoelectric, 51% belongs to hydroelectric. However the last two are affected by the dry season.

“The Government must execute projects like the San Francisco, the Coca Codo Sinclair, since they would improve the percentage on favor of clean sources, moving away thermoelectric sources.”