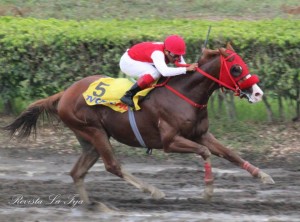 The journalist Vicente Lopez, from the equestrian magazine La Fija, has written a reportage detailing the triumphant journey the Stud Álvaro Noboa  has obtained last Sunday at the Miguel Salem Dibo hippodrome, in Samborondón, Ecuador.

The horses of businessman Alvaro Noboa, Facheng and Overbrock, brought from Peru, drew the attention at the race track despite the conditions, says the magazine.

“They placed the prestigious block on high, ignoring the winter, the fact they had not run for more than half a year, and the condition of the track, very muddy by the rains in the sector,” says the report.

Focheng highlighted by imposing the record of 1,100 meters in 1 minute, 3 seconds and hundredths 4th this season. The magazine details that Focheng came close to take away the national record of Bonito.

Meanwhile, Overbrock has turned one of the favorites in the homage classic to pioneer rider, Enrique Guzman Aspiazu. In spite of coming in second place, the Overbrock’s race was a “formidable performance,” qualifies the magazines.

Behind these horses is their owner, businessman Alvaro Noboa, who is back to “the winner’s circle,” says the magazine.The whole Noboa family is also included, who are satisfied by the performance of their horses and thanked for the support to achieve these victories at the start of the year.