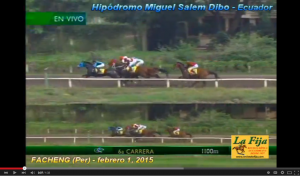 La Fija, the equestrian magazine captured in video the sixth race of the equestrian event held this Sunday, February 1, where the Facheng Horse won, which is property of businessman Alvaro Noboa.

During the film the tough competition Facheng had with his rival Polvos de Estrellas (Stardurst by its Spanish name), is described. But Alvaro Noboa´s stud showed great skill on the racecourse Miguel Salem Dibo

The photo of the finish shows that Facheng won by inches while the Ecuadorian rider José Jurado led him.