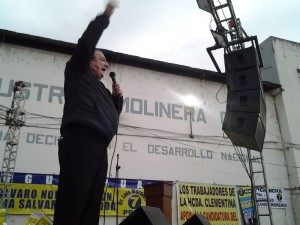 With God, Ecuadorians, my heart is swollen with love and happiness to see more than 10,000 people have come from the 24 provinces across the country to celebrate the great march that we have initiated to escape poverty and to transform Ecuador into a country where all Ecuadorians can say with pride that they have a cement house, that they have a family car, that they have honorable work, that they have a profession, an art, an occupation.

It is obvious to my opponents that they don’t know how to do this. For the last hundred years, they’ve considered it to be unreal and impossible. But for you, and for me, this is not only possible, but it’s what we are going to achieve from February 2013. Our country is one of the richest in the world, but unfortunately, we are so riddled with poverty throughout Ecuador, it would be wise to explain: How are we going to do it?  It’s easy to say, “…to have a cement house,” “… to have a car,” and “…to have a job that pays thousands of dollars,” BUT I KNOW HOW TO DO IT. The way to do it is the same that has been done throughout the world, in countries like Ecuador with poverty and that today have left that poverty behind.

These people lived in a country like the United States, like Singapore, like Taiwan, where investors are well-received, where taxes are going down, and where they are supported so that they can generate jobs. And that’s what I want to do with friends from around the world, and those who, though they not friends, are interested in investing in Ecuador. I invite thousands of business to come, each with a billon, two billion, three billion dollars to establish, here in Ecuador, huge centers of work; that Blackberry phones, nearly 50% of the parts for which are produced in Mexico be made here in Ecuador, as well as sweatshirts, and shoes, and computers, and in order to do so, that those same businesses commit to training and  technological development within the business that they bring to the country.  That man who often doesn’t have even a bachelor’s degree, will, in a few months, automatically have a specialization so that he can become a specialist, and from being a specialist, he will be able to ask a higher salary of his employer, and by earning a higher salary, he’s going to have social security through the IESS and via the banks he will become a good credit risk, and in that way will be able to buy things more easily. That very same person who was poor can now buy his cement house.

I will support all the banks who give that house to the poor, that same man who, given his specialization will be earning $1,000, $2,000, $3,000, $5,000 dollars, which is something that I do in this very company, promoting the employee who specializes because, as a businessman, I need him. Then he can acquire a car, like that nice red car over there, making a monthly payment of $200 or $300 dollars, that with today’s basic salary would be impossible to make. If he earns $2,000, then yes, it is enough to acquire that car and I would support the banks and the state financial institutions so that every one of you would have a car like that.

Without the hurdles that this Government is imposing in the universities, I would have all young people got to university to learn how to develop Ecuadorian products, like bananas. In Honduras, they have the best schools for banana production, while Ecuador is the biggest banana producer. Therefore, under my government, the best university for banana would be in Ecuador, not in the Honduras.  This same person could, with the support of the Government, go to universities specialized in shrimp, rice, flower, or fish production.

I have made money my whole life, and there is no one who has beat me at it in this country, but this time I am not going to devote myself to making money for me, but rather for making money so that poor Ecuadorians will no longer be poor; so that all of Ecuador has money, money and more money.

We need judicial security. What is that? When those who are invited come to our country to set up businesses, they don’t want to be persecuted by the IRS or persecuted by some Government institution. They come here to generate work and when they are pursued, they want to go to a transparent court, and to be proven right, if they are, and that there is no class warfare in this country.  With pride I say that my employees are my family; they are not my enemy; they are my brothers, my sons, they are the best part of my heart.

What more does Ecuador require? It needs to end the violence like when someone steals everything from a poor person, when they rape his daughter, kill his wife, steal his refrigerator, take the stove, when they take all his possessions. This has to stop. Under my government, I will send the police to take care of the poor neighborhoods so that this will no longer occur. I’ll put a policeman on every bus, so that the first thief who tries it on will be taken prisoner in that very moment.

And I am going to put an end to the express assaults that you have been victims of; we are going to send the thieves and the murderers to an island near the Galapagos so that they learn to work like all of us and learn not to steal. There is also persecution on the part of the Government against the drivers; there is high level of persecution against public employees and I myself have suffered political persecution because Correa knows that he couldn’t come up against me.  I am going to transform the poor classes into the wealthy class of Ecuador and he knows that I am going to beat him in the 2013 elections, like I won in 2006. But, what’s more, he knows that in the second round, he’s not going to have the MPD, nor the PRE, not Pachakutik, nor the freedom that the Patriotic Society had. Instead, they are all going to be against him and his tyranny because the people can’t bear the tyranny any longer.

More than ever, I need you to be alert in the streets, if necessary, in a peaceful way, so that every time that they try to mistreat me, or prevent me from participating in the next elections, you protest, because by impeding me, the only thing that they are going to achieve is that there are no challengers, and you will continue in poverty, in the state of delinquency from which you want to escape.

For that reason, Ecuadorians, I want to invite my family who are present here to come up to the stage and to tell you that no one can do this alone and that my entire family is committed to this great change, and that, from when they were very young, they have learned to love this country, to serve it and they will live their lives, the forty more years that I have, or a hundred, or all that they have to live, fighting for a better Ecuador.

Thank you very much. May God bless you all!