The Ecuadorian businessman Alvaro Noboa participated in the Best Buddies gala along with his friend Anthony Kennedy Shriver. This year he standed as Goodwill Ambassador.

In the Fontainebleau Hotel, Miami Beach, FL, was held the eighteenth anniversary of the Best Buddies Foundation, led by Anthony Shriver Kennedy, which is an organization dedicated to support people with special needs. Each year, this event is attended by more than 800 national and international guests, who are noted for their solidarity in the social field, including businessmen, athletes and celebrities such as: Jon Secada; Alonzo Harding Mourning Jr., former American basketball player; Gabriela Isler, former Miss Universe; and Buddy Stacy Powell. 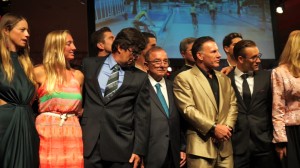