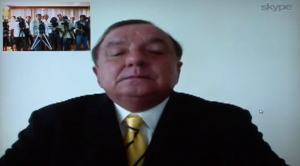 I will register my candidacy at the end, to give the alliances more time.

Alvaro Noboa announced today trough a press conference from Miami via skype,  being the spirit of the opposition to form alliances against the Chief of State, he will potpone the registration of his candidacy.

“I have decided to postpone the registration of my candidacy until is possible, even if I have to do it on the day before the deadline, around the 15 of November. This is going to buy some time  for the political parties and movements, which represent the opposition, to keep talking in order to find a solution and join forces toward an alliance against the actual chief of state Economist RafaelCorrea ” (….)

The state machinery, in the current circumstances, added Noboa, “it’s going to be very difficult to defeat id there is no UNITY.”(…)

He disclosed that the discussions with Sociedad Patriótica are well advanced and it has been some obstacles with Guillermo Lasso, the candidate of the extreme right wing.

Alvaro Noboa made a call to  the candidates of the two major forces of the opposition:

“I think we should put aside, at this moment, any personal aspiraron or vanity, any ideological difference, un order to defeat the actual President. If we don’t come together, we will have the same government again and we will face a state of poverty like Cuba, which is the place where the President want a to take us“(…)

Ecuadorians, it being my spirit that all the opposition run together in opposition to the Chief of State, Economist Rafael Correa, I have decided to delay the registration of my candidacy as long as possible; even until the penultimate day allowed for registration, which would be around November 15. That will give the different parties and movements that today represent the opposition the time to continue holding talks until we find a solution allowing us to go together as one united fist in opposition to the current Chief of Staff, Economist Rafael Correa, in the next elections.  The State machinery, and above all the conditions that they are currently manipulating have become very difficult:  the Chief of State pressures and intimidates by all possible means any opposition figure, including myself.

Our conversations between the PRIAN and the Sociedad Patriótica, have advanced considerably, but we have had a lot of difficulties due to resistance on the part of Guillermo Lasso, the extreme right wing candidate.

I believe that, at this moment, we should leave aside any personal aspirations, any ideological differences, any vanity, in order to defeat the current head of state and to be able to move forward with our plan to transform the poor of Ecuador into a middle class that owns cement houses, automobiles, first-class education, affordable food, and jobs, jobs, and more jobs. That middle class should be earning between $1,000, $2,000, and $3,000 dollars a month, minimum, which would allow them to receive loans for a car, to receive loans for a cement house and to live decently.

I ask Ecuadorians to call on Mr. Guillermo Lasso and to invite him to unite in opposition with us against the current regime. If not, we will once again have the same government and we will enter into a state of total poverty like Cuba, which is what our Chief of State wants to bring us to. That is what I wanted to say to you, today, Ecuadorians.

Also, as a second point, I have seen in the news that the Chief of State has met with the owner of Dole, or the largest stockholder of the Dole company, and I would like the Press to join me in asking the Chief of State if he’s going to collect $700,000 dollars in taxes from him, like in 2005, or $99 million dollars like he’s trying to collect from Exportadora Bananera Noboa, en order to use that demand as one more form of political intimidation? The same way he is hounding all the Ecuadorian banks in order to hound Mr. Guillermo Lasso.

After that, what I have to say to Ecuadorians is that we will continue to work throughout the entire Republic. We are already finishing the lists of Assembly Members of all the provinces and you are going to see in those lists of Assembly Members, you are going to see new faces, young people, healthy people, which is what I am offering to the country. May God inspire us all, and thank you very much.