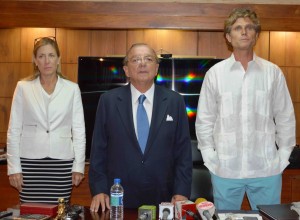 Foundations Crusade for a New Humanity (FCNH for its Spanish acronym) and Best Buddies International, led by the Ecuadorian businessman Alvaro Noboa and Anthony Schriver Kennedy respectively, came together to train a group of people so that they can develop their special abilities to be included in the Ecuadorian working life.

Alvaro Noboa, founder of the FCNH, and his wife Dr. Annabella Azín, hosted the press conference, which was attended by Anthony Schriver Kennedy, director of the Best Buddies International Foundation and his wife Alina Shriver, who served as an interpreter.

For his part, Anthony Schriver Kennedy said he was excited to share with the Ecuadorian foundation and be part of this social project. “Thank God we have friends like Alvaro and Annabella who have helped us and committed to the work done by the Best Buddies Foundation. (…) I think that everyone can build, especially those with intellectual disabilities and that is the spirit that is within everyone. I have seen in 50 countries, in general I have seen in Mexico that our representative Carlos Slim supports the employment program for persons with disabilities, and here in Ecuador, Annabella and Alvaro will do the same. Thanks to your support, there will be thousands of employment opportunities for people with disabilities,” he stated.

Anthony said that the great bond he had with his aunt Rosemary Kennedy, who had intellectual disability, encouraged him to create his organization. He said he learned to recognize that everyone has a great gift. “I learned that she was the best swimmer in the family, and that was her great value.”

Therefore, Schriver Kennedy says that the big challenge is to integrate these people in social activities and community life.

Meanwhile, on the World´s day of Autism Awareness, Annabella Azin sent greetings to people with this disorder.