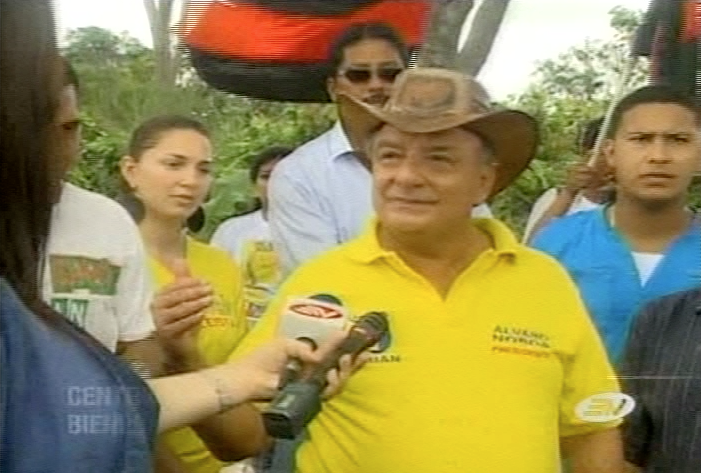 Teresa Arboleda: Today belongs to Álvaro Noboa. Carolina Mella accompanied the PRIAN leader in a tour of Yaguachi. Noboa says that he is not tired, and that he hopes to live many more years to achieve his objective of reaching the Presidency.

Carolina Mella:  Without waiting for anyone else to do so, the candidate set the stage to give his statements.

As he has said before, Presidential candidate, Álvaro Noboa does not want to waste money on posters or advertising, but that, rather, the money goes to setting up micro-enterprises.

It was Mrs. Eva’s turn, a farmer who lives in Yaguachi. She explained to the candidate what she would do with the supplies that he delivered to her. He was even encouraged to try them out. Happy with what she had received, she took him to the land that she is preparing for planting.

Carolina Mella:  Giving all that, will it also be transformed into votes?

Álvaro Noboa:  No, no the issue at that moment isn’t about getting votes, it’s about helping the unemployed.

Carolina Mella:  This is a campaign?

Álvaro Noboa:  Look, I’ve been doing this for 31 years.

Carolina Mella: 31 years, of which the last 15 you have  tried five times to reach the Presidency.  You’re not tired of this campaign, watching you walk, to be in the countryside…

Carolina Mella:  You want to live that long.

Álvaro Noboa:  I want to live that long in order to serve the poor and to give thanks to God.

Carolina Mella: Live to achieve his grand goal: to be President. In the center of Yaguachi, a parade awaited him. He greeted them and handed out t-shirts. The people welcome him; they know him. A sticker distracts him for one moment. It’s a photo of his former companion in the movement and ex-chief of the PRIAN bloc, Vicente Taiano, who now forms part of another list.

He smiles little, and although he is conscious of the press having full coverage, he speaks very little on camera. The humid climate impels him to stop at a “fried suckling pig vendor” who rush to prepare more meat for the candidate and his followers.

His activities as a businessman don’t stop, not even while he is on campaign. He does everything by telephone, the parade continues, but this time the truck via truck, a route that he knows already, but that doesn’t matter to him: he will continue traveling on it until achieving his objective.