The first “Fathers and Sons Entrepreneurial Summit” of the largest Latin America business concerns was held on 22-25 May. Carlos Slim, president of Grupo Carso and Telmex, and one of the 25 richest men in the world, was the host of the gathering which took place in Mexico City.

The meeting’s objective was to analyze the irreplaceable role of national businesses in the present and future of countries in the region.

The meeting was not meant to discuss business concerns, but rather to broach significant regional social issues, which were discussed in intense conferences from the night of Thursday, May 22, until Saturday, May 25. Topics included: poverty, sustainable development, social role for private enterprise and globalization. Alvin Toffler, business guru, was the main speaker.

A rather curious presentation regarding archeology by Mexican expert, Eduardo Matos, opened the event, with frequent interjections by Slim who has a longstanding interest in archaeology, as do the majority of the billionaires in attendance at the Mexico summit.

Until very recently, it was difficult to bring together more than two of these personalities. However, on that day they created space in their busy agendas to attend what analysts called “the first Latin American Businessman’s summit in the history of Latin America”.

Businessman Alvaro Noboa acted as moderator at the conference “The Entrepreneur’s Social Participation” and as a panelist in “Latin America’s Great Infrastructure Projects”.

One of the objectives of the Father and Son event was to establish personal acquaintance among the businessmen’s successors, just as is the case among their fathers, in such a way that they begin interrelating so that plans for integration and business activity continue throughout the future from generation to generation.

The Ecuadorian businessman traveled in the company of his wife, Anabella Azin, his son Daniel and his nephews Luis, Antonio and Leonardo. Daniel, who is 15, spoke at the press conference the Noboa group offered and said:

“I’ve had the opportunity to mingle with young people from several fraternal countries, and in so doing, share in their projects and listen to their opinions about the present, but above all, the future.”

Statements such as these were well received. “What impressed me was to listen to the new generation speak about the future of our countries. They know that their future and that of our companies depends on what happens in our countries, that they stabilize and grow economically and socially”, stated Julio Mario Santo Domingo, Bayana Group, Colombia.

The analyst of Colombian magazine, Cambio, Enrique Hidalgo commented, “The new generation confirms that all this implies a long-range vision, which is not merely circumstantial”.

And for the present there is even better news.

MAIN THEMES OF THE SUMMIT

Another agreement obtained at this meeting was to have businessmen and governments join forces and present a common front to negotiate free commerce and investment agreements with the US and Europe. One of those present at the summit stated, “We are not competing on equal grounds as, due to dire need for foreign investment, we hardly impose any regulations. However, when we wish to do the same in the first world, we are faced with a myriad of difficulties, beginning with a visa. 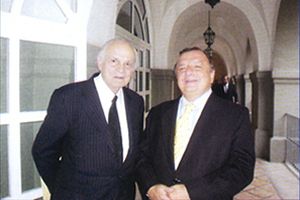 For Noboa, the future of Latin America depends a great deal on what businessmen do on behalf of economic and social development of their respective countries. “Modern businessmen are combining social aid as part of entrepreneurial politics in such a way as to augment the standard of living”. He added, “Latin businessmen are focused in bringing together Latin America to form a 500 million person-market so that together we can take our countries forward and face globalization together”.

Comments were made to the effect that this meeting was more important for regional development than the meeting of presidents in Cusco.