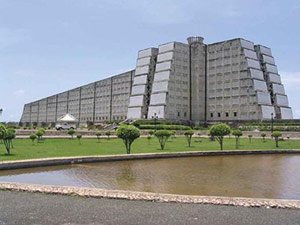 La Romana, one of the most beautiful places in the Caribbean, was the appropriate setting for the second “Fathers and Sons Entrepreneurial Summit” held in the Dominican Republic between May 27-30, and attended by the most important Latin American businessmen and their sons.

Initiated last year by businessmen Carlos Slim, Gustavo Cisneros and Julio Mario Santo Domingo, of Mexico, Venezuela and Colombia respectively, in order to form a solid and progressive entrepreneurial front, the summit had its second encounter on the Caribbean island. This year, more than 160 people participated, working full steam from Thursday to Sunday. 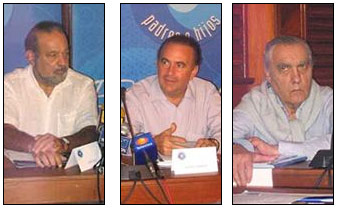 The excitement began Thursday morning when the managerial delegations began to arrive at Santo Domingo Airport from 13 different countries. There they were met by personnel from the most beautiful resort in the Caribbean – Casa de Campo – who took them, by “guagua” (or minibus), to the meeting place, a 90-minute trip in all. Many of the participants preferred to arrive by private plane , touching down on the runway of the Casa de Campo resort, which is the property of one of the event organizer’s, José Pepe Fanjul. Almost a small town, it comprises miles and miles of hotel facilities, with a 300-room hotel, 1,500 villas and 5,000 employees to attend to guests. Typical personalities include President George Bush and Mikhail Gorbachev; singer Shakira owns her own property. Well, with the arrival of the businessmen, Casa de Campo went into top gear! 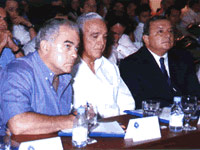 At 4 pm, the Managerial Congress was installed at the La Romana Country Club. A 10-minute introduction by Jose Pepe Fanjul welcomed the participants who then went on to introduce themselves, their country and their companies. At 4:45 pm, the first panel got underway: “A Current Economic Model: Adjustments and Proposals for Sustainable Development and Job Creation”, held by Carlos Slim, Latin America’s wealthiest man, valued at $10.000 million dollars, and moderated by the eminent Colombian businessman, Carlos Julio Ardila.

The second panel, “Global Competitiveness in the Region: Global Enterprises” was held at 6pm by Venezuelan strongman, Gustavo Cisneros, with contributions by Mexico’s Maria Asuncion Aramburuzabala, her countryman Eugenio Clairond, and Alejandro Santo Domingo. The session was concluded at 7 pm and the managers reconvened in the evening at Pepe and Alfonso Fanjul’s house for the welcoming cocktail and dinner party.

Friday’s session began early and was very hectic. Hipólito Mejía, the President of the Dominican Republic, was in attendance and four presentations took place before midday. During the second presentation, Alvaro Noboa intervened as moderator and elicited applause and congratulations from the audience for his contribution to the theme entitled “Public Accounts and Foreign Trade, Transparency and Dissemination of its Analysis and Evaluation”.

The Argentinean manager Alberto Roemmers was one of the participants who congratulated Noboa, as well as several of the young people who enjoyed and derived benefit from the presentations, especially that of Harvard Professor, John Davis, who expounded on the theme “Generational Transmission, the Vision of an Expert, Practical Experiences”.

The dialogue continued during lunch. Former President of Spain, Felipe Gonzalez, who was introduced by Julio Mario Santo Domingo, elicited admiring applause for his clear ideas with respect to the development of Latin America.

Friday afternoon included the presence of none less than the President of Panama, Martín Torrijos, who was speaker of honor at 5:45 pm. With that presentation, in which Gonzalo Tanoira, Marcelo Odebrecht and Dionisio Garza interacted, Friday was concluded, and guests were this time attended to by Gustavo Cisneros at a splendid cocktail-dinner that began at 9 pm. 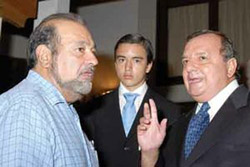 From 10 am until 1:30 pm on Saturday, the eight and ninth presentations were submitted. Chilean Alvaro Saieh spoke to the theme of “Financing the Development of Latin America ” which was moderated by businessman Stanley Motta. At noon, Carlos Slim and Gustavo Cisneros closed the round of conferences with the presentation, “Conclusions and Proposals for Growth with Employment and the Fight against Poverty”.

Saturday, the “Fathers and Sons Entrepreneurial Summit” also featured the presence of a Head of State: Leonel Hernandez, former- and newly re-elected President of the Dominican Republic, who arrived by yacht at 10:45. Fernandez, who will be inducted as President next August was the speaker of honor at the luncheon, introduced by Alfonso Fanjul. 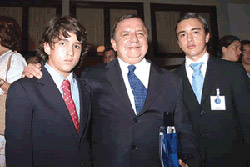 Ab. Álvaro Noboa with his sons after one of the sessions

The rest of the afternoon provided free time for the businessmen. Dinner and a party were held at 9 pm at the Yacht Club and on Sunday morning the businessmen continued to enjoy all the sporting activities offered by Casa de Campo – polo, golf, and tennis – as well as long walks or simply relaxing around the pool. At 1:30 pm, this year’s meeting concluded with lunch at the Santa Catalina Island and farewell speeches given by Alfonso Fanjul and Federico Sada.