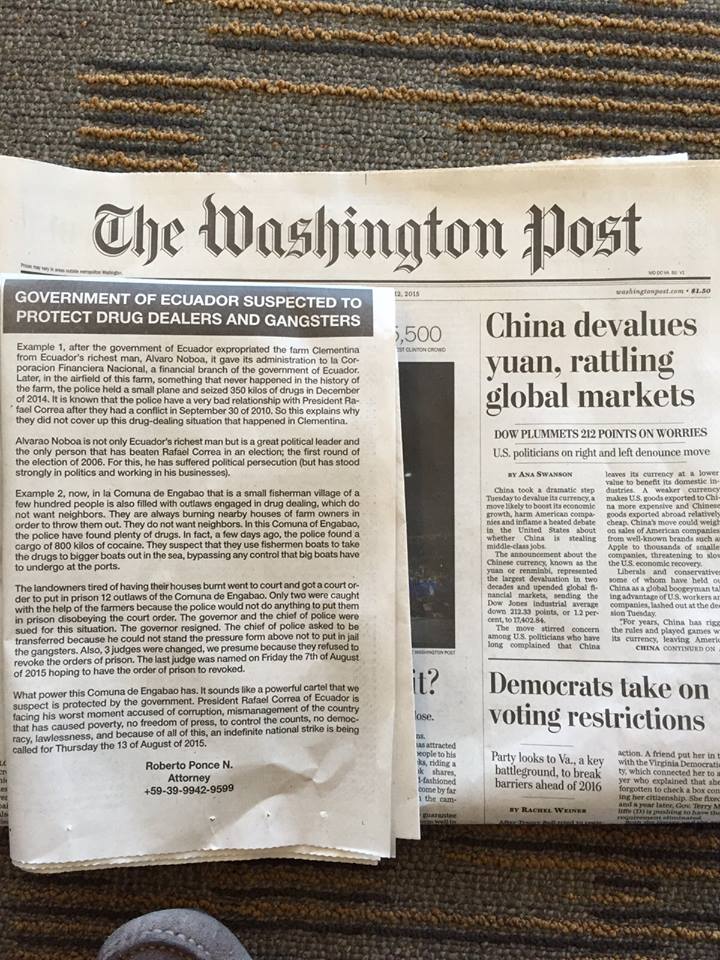 Later, in the airfield of this farm, something th never happened in the history of the farm, the pólice held a small plane and seized 350 kilos of drug in December of 2014. It is known that the pólice have a very bad relationship with Presidente Rafael Correa after they had a conflicto in september 30 of 2010. So this explains why they did not cover up this drug-dealing situation that happened in Clementina.

Alvaro Noboa is not only Ecuador’s richest man but is a great political leader and the only person that has beaten Rafael Correa in an election; The first round of the election of 2006. For this, he has suffered political persecution (but has stood strongly in politics and working in his businesses).

Example 2, now in la Comunca de Engabao that is a small fisherman village of a fews hundred people is also filled with outlawas engaged  in drug dealing, which do not want neighbors. They do not want neighbors. In this Comunca of Engabao, the pólice have found plenty of drugs. In fact, a few days ago, the pólice found a cargo of 800 kilos of cacaina. They suspect that they use fisherman beats to take the drugs to bigger boats out in the sea, bypassing any control that big boats have to undergo at the ports.

The landowners tired of having their houses burnt went to court and got a court order top ut in prison 12 outlaws of the Comunca de Engabao. Only two were caught with the help of the farmers because the pólice would not do anything top ut them in prison disobeying the court order. The governor resigned. The chief of pólice asked to be trasnferred because he could not stand the pressure form above not top ut in jail the gangsters. Also, 3 judges were changed, we named on Friday the 7 th of august of 2015 hoping to have the order of prison to revoked.

What power this Comunca de Engabao has. It sounds like a powerful cartel that we suspect is protected by the govermment. President Rafael Correa of Ecuador is facing his worst  momento accused of corruption, mismanagement of the country  that has caused poverty, and because of all of this, an indefinite national strike is being called for thursday the 13 of August of 2015.