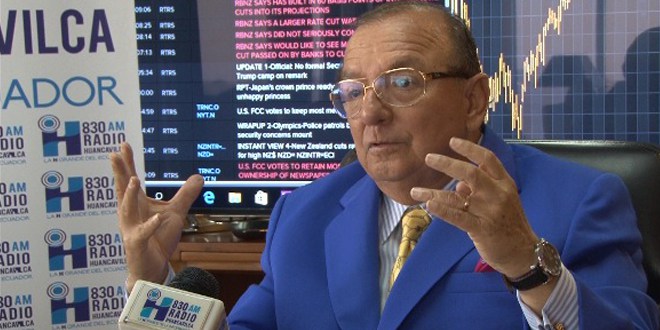 Businessman and leader of the political party Adelante Ecuatoriano Adelante party (AEA), Alvaro Noboa, spoke exclusively for radio Huancavilca and analyzed the electoral, social and economic scenario of the country.

Noboa ensured that his party Adelante Ecuatoriano Adelante represents the change and a way to tell the Ecuadorians to move together towards a better Ecuador. In addition, he was very grateful for the more than one million signatures that helped the registration of his party and stressed that they are still collecting signatures.

For the businessman, there is a “bestial” economic crisis in the country, which has increased unemployment, the cost of living, poverty, a large deficit of consumer products and the prices of manufactured goods by the amount of import taxes that exist in Ecuador.

The political leader stressed the need for free trade agreements, one with the European Union (EU), like neighboring countries like Colombia, Peru and Chile have so that our products can compete with them, a situation the following President shall correct, he said.

Alvaro Noboa, said that if elected President, one of the first steps he would do is give legal certainty to the Ecuadorian and international investors. “There is an overload of power by the government that scares investors,” he said. He also said that during his period of government he visualizes the arrival of 5,000 companies per year that will invest in the country.

On the issue of taxes, he said “I need a 5 thousand times richer country than the current one. My view is that Ecuador will becomes like Singapore, like China, like the US,” he said. He also favored the elimination of the tax on foreign exchange outflows and the safeguards.

At the end, he criticized the Heritage Act which ensures that the state ends up being the heir and not our children.