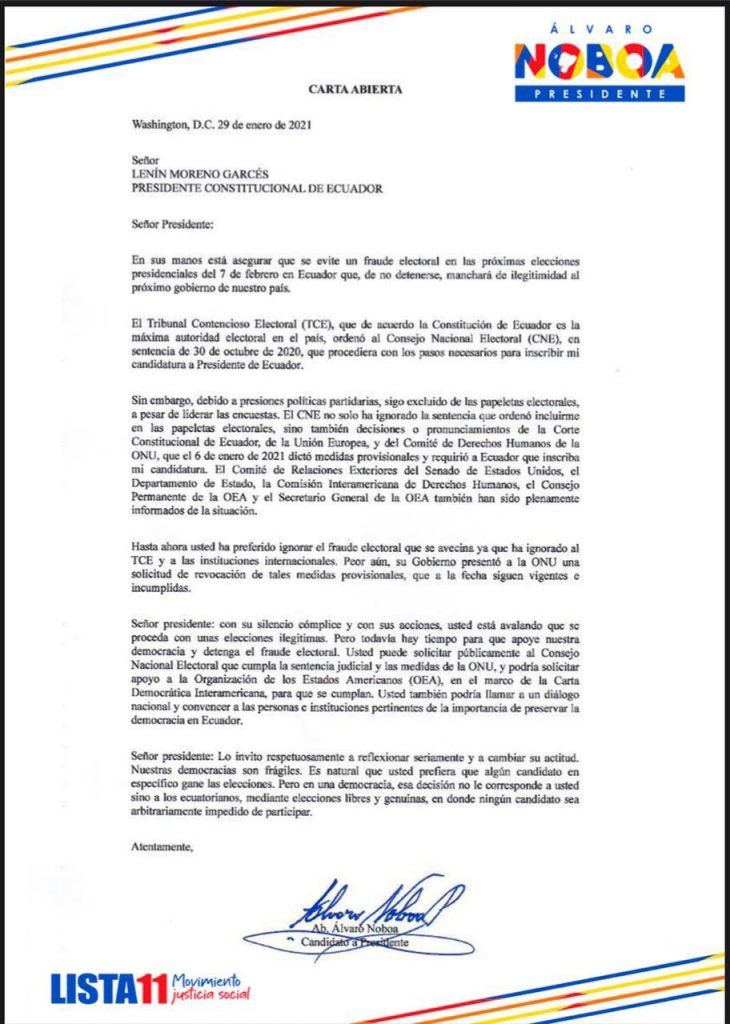 It is in your hands to ensure that electoral fraud is avoided in the next presidential elections on February 7 in Ecuador that, if not stopped, will stain the next government of our country with illegitimacy.

The Contentious Electoral Tribunal (TCE), which according to the Constitution of Ecuador is the highest electoral authority in the country, ordered the National Electoral Council (CNE), in a judgment of October 30, 2020, to proceed with the necessary steps to register my candidacy for President of Ecuador.

However, due to partisan political pressure, I am still excluded from the ballot, despite leading the polls. The CNE has not only ignored the sentence that ordered to include me on the electoral ballots, but also decisions or pronouncements of the Constitutional Court of Ecuador, the European Union, and the UN Human Rights Committee, which on January 6, 2021 issued provisional measures and required Ecuador to register my candidacy. The Foreign Relations Committee of the United States Senate, the Department of State, the Inter-American Commission on Human Rights, the Permanent Council of the OAS, and the Secretary General of the OAS have also been fully informed of the situation.

Until now you have preferred to ignore the looming electoral fraud as you have ignored the ECA and international institutions. Worse still, his government submitted to the UN a request to revoke such provisional measures, which to date are still in force and unfulfilled.

Mr. President: with your complicit silence and with your actions, you are endorsing that illegitimate elections proceed. But there is still time for you to support our democracy and stop electoral fraud. You can publicly request the National Electoral Council to comply with the judicial ruling and the UN measures, and you could request support from the Organization of American States (OAS), within the framework of the Inter-American Democratic Charter, so that they are complied with. You could also call for a national dialogue and convince the relevant individuals and institutions of the importance of preserving democracy in Ecuador.

Mr. President: I respectfully invite you to seriously reflect and change your attitude. Our democracies are fragile. It is natural that you prefer that a specific candidate win the election. But in a democracy, that decision does not correspond to you but to Ecuadorians, through free and genuine elections, where no candidate is arbitrarily prevented from participating.