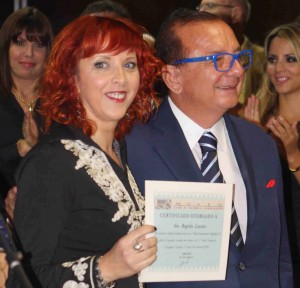 Vegoña Lozano Mejuto, winner for the first place with the photography “Semana de Santa Loja (Brethren of Our Lady of Hope)” ,

Last night, January 28, was held the First International Biennial of Photography Alvaro Noboa, organized by the Luis Noboa Naranjo Museum in Guayaquil, where artists from 37 countries participated. The gala was an absolute success; the exhibition halls were full of guests who were able to observe some of the 200 photographs submitted for the contest. As opening act, the museum’s director, Pablo Martínez, welcomed the guests and visitors. Then, philanthropist and businessman Alvaro Noboa, gave a speech about the importance of organizing this kind of events and how photography has influenced in society.

“Undoubtedly this is the most important event the Luis Noboa Naranjo Museum has held, because we have achieved the participation of photographers from the five continents, and this confirms that photography is a complex and difficult art to which we all can access either studying or being autodidact,” said Mr. Noboa. The first place was awarded to Begoña Lozano, who came from Malaga, Spain, for her work entitled “Semana Santa de Loja.” The photograph was taken in 2014 while she was conducting a photo report on this religious tradition. “It’s a picture that strucked me then, by the apparel, the robes, the sandals …” explained the photographer, 45, when asked why she had chosen the image taken with a technique called ‘zoom.’

Meanwhile, the Cuban Harold César Ferrer won the second place for his work entitled “Faith.” The artist could not come from his native Cuba, but his prize will be sent. “My favorite work is the one of the fishermen,” said businessman Giovanni Orlandini, pointing to the picture of the Ecuadorian Edison Patricio Ruilova, 54, who won third place for his work: “The first task of 2015. Ruilova, who is a self-taught photographer for eight years, took the photo at the San Pedro beach while doing paragliding off a cliff.

The museum also granted five honorable mentions and a prize to Ecuadorian Gina Garcia for the Best Old Photography. The image portrayed a urban transport vehicle of Guayaquil in 1956. Anabella Azín, Alvaro Noboa’s wife, said that the organizers of the museum and she were “surprised by the great amount of photographs sent to the contest, so many that there were no room to exhibit them all.”

For the next biennial of photography organizers are thinking of somehow providing more space to showrooms due to the amount of works sent, Mrs. Azín said.