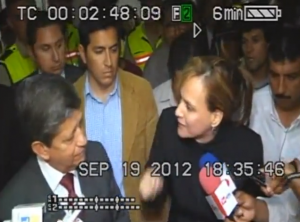 Before the collective media,  with Director Marx beside her, Dr. Silka Sanchez, denounced one more time the political persecution against Alvaro Noboa by the SRI. This organization pretends to collect, in an unfair and illegal way, 90 million dollars of income tax, plus fines corresponding to 2005. There are bigger companies than Bananera Noboa, such as Dole and Chiquita, which sold more and were more profitable and the SRI is just collecting, for the same year 2005, $ 700.000 and $ 37000, respectively.

This happened at the end of the audience against Judge Augusto Posligua, accused of malfeasance, and who was taken to the coastal penitentiary due to a 60 days order of preventive imprisonment issued by the President of the Provincial Judicial Court of Guayas.

Judge Posligua is imprisoned because he granted a preventive measure in favor of Bananera Noboa, that protects the people who are utterly defenseless, for not allowing them the right for their defense and due process.

Correa’s Government wants to stop the participation of Alvaro Noboa in the Presidential elections, and that’s why he persecutes him, said Sanchez, facing up Carlos Marx: ” let us defend ourselves, let us litigate, stop threatening and intimidate the judges” she concluded.