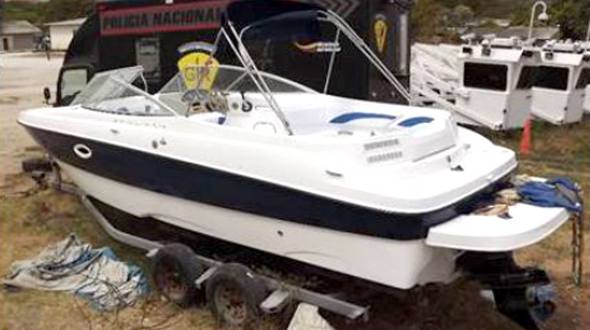 This boat, valued at $ 31,321, was part of the auction held yesterday, for which they received bids on sealed envelopes. SOURCE: EL UNIVERSO

The Internal Revenue Service (SRI for its spanish acronym) began yesterday’s stage in a closed auction of property seized at Bananera Noboa Exporter (valued at $ 136.01 million), sequestered for an alleged debt of $ 95 million for the payment of Income taxes.

Unlike the process for the first two days of auction (Tuesday and Wednesday), which topped 5 of the 9 vehicles displayed through an auction between bidders, this time offers from the stakeholders will be analyzed by the Department of Collections .

“The collector has up to 3 days to accept and analyze the offers and call the bidders for a bid, there will come a winner,” said a spokesman for the Internal Revenue Service.

Meanwhile, yesterday in the Francisco de Orellana Avenue, near the Internal Revenue Service building, from a truck messages were broadcasted, indicating to potential buyers to not go to the auctions.

This afternoon is expected to continue with the receipt of tenders, also in sealed envelopes, this time for six aircraft (valued at $ 1.8 million).

Meanwhile, Juan Vizueta, Bananera Noboa Representative, reported yesterday afternoon that presented today, at 10:00, in the Office, an investigation request. “We will ask for an investigation regarding these types of unusual movements that have made these buyers,” said Vizueta, who said that some of them have reported no taxes. “It is logical that they are able to pay.” He said the investigation would be based on the Prevention, Detection and Eradication of the Crime of Laundering money and Funding of Crime.