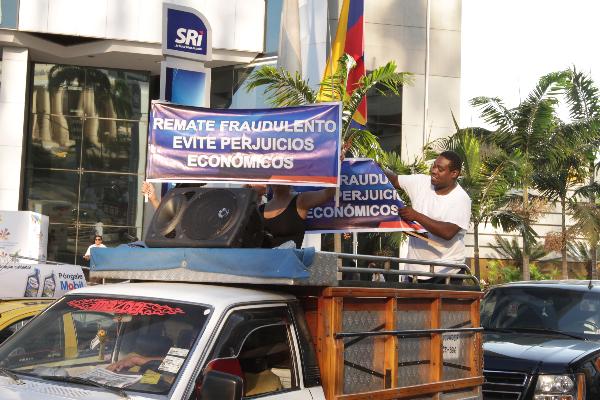 Protests. Yesterday, sympathizers from Banana Noboa Exporter carried out posters and exhibited them over the auctions. SOURCE: EXPRESO

Yesterday, on the outside of the Internal Revenue Service advertising was against the auction.

The defense of Banana Noboa Exporter announced yesterday at a news conference that the auctions conducted by the Internal Revenue Service would have possible money laundering cases, said the company’s lawyer, John Vizueta. “We are surprised that the people who have appeared at these auctions are tax payers that have declared to the Internal Revenue Service itself, during fiscal year 2012, paying zero cents taxes cents to the Ecuadorian State. How they come with bundles of money to buy cars for $ 30,000 and more, “he said.

According to Vizueta, they will go to the Gafisur international organization to be the ones who, with greater transparency and acting with fairness, to observe each of the “unusual activity” they believe exist in the process.

Yesterday In the afternoon, people against the coercive process that leads the Internal Revenue Service, delivered flyers and advertised through banners, on the outside of its building, the “auctions were fraudulent.” DVA