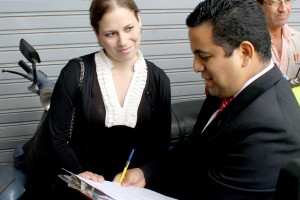 The demand for payment having been rescinded, the forcible collection being annulled, the embargo, the impounding of goods, the seizure of property being annulled – something that the IRS should have done the day following its issuance in May 2010, given that it was advised of it inadmissibility – why didn’t the IRS carry it out? It waited until September 27, 2012. Why? BECAUSE ON THAT DATE THE LAW IN DEFENSE OF LABOR RIGHTS (LODDLA) WAS IN EFFECT FROM THE PREVIOUS DAY WITH THE PUBLICATION OF THE OFFICIAL REGISTER.

That is to say, it was known that LODDLA, which was being processed since July 2012, since the Assembly did not deal with the objections sent by the President on August 24, 2012, would be put into effect by the Ministry of Law on September 26, 2012. Why did the IRS wait until this law came into effect?  To make political use of it, for which purpose it was established, and in that way it could be drawn into the demand for payment against Álvaro Noboa, in making it “public knowledge” that he is the owner of what, in reality, he is not, and to carry out the outrages that we observed last Friday.  Furthermore, IN ORDER TO PROHIBIT A PRESIDENTIAL CANDIDATE FREE TRANSIT THROUGH ECUADORIAN TERRITORY.

That is to say, nullity that marred the earlier demand for payment and that OBLIGED THE EXPORTADORA BANANERA NOBOA S.A. TO LITIGATE FOR MORE THAN TWO YEARS, IN FULL KNOWLEDGE THAT THE IRS WAS ACTING ILLEGALLY IN ATTEMPTING TO CARRY OUT THE PROCEDURES WAS IGNORED.  Nobody can doubt any longer that the damaged caused was the result of a perverse, harmful and criminal intent on the part of the revenue collection service.

The new demand for payment is as unconstitutional and illegal as the annulled one:  we will prove it in our description of exceptions. It will be the same story once again: we will follow the well-worn routine, defend ourselves before public national authorities as a requisite that is needed to be able to litigate in the international courts; and from there face the hidebound procedures of the current political power which uses the IRS as a tool of extermination.

Our actions will follow an ordered sequence in time, revealing the illicit and arbitrary acts and offenses committed by those implicated in this new hoax masquerading in legality.

To those members of productive Ecuadorian society, we say: Warning!  Check the application of the LODDLA constructed in this case and you will see, like we did, that the state will take ownership of all your goods whenever it feels like. It only requires establishing a debt with any State institution or that the State acquire debt to become the new title holder, and without further discussion, make way for embargos, repossessions, non-existent associations, imaginary group affiliations, supposed relations. This is a farewell to individual and family unions or hereditary organizations. How many actions have State institutions carried out to date?  Ecuador has surrendered itself to Power!

TODAY NOBOA. TOMORROW, IT WILL BE YOU!