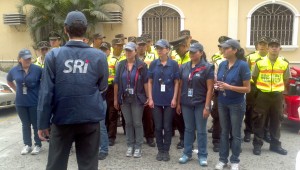 1.     On September 27, 2012, the IRS declared null all the proceedings in the arbitrary and illegal attempt, dating from May 19, 2010, to collect the diabolic tax imposed against Exportadora Bananera Noboa S.A. That is to say, the IRS affirms, “FOR TWO YEARS I HAVE PURSUED ÁLVARO NOBOA IN AN ILLEGAL, ILLEGITIMATE AND ARBITRARY MANNER.”

2.     Furthermore, AFTER MORE THAN TWO YEARS, THE PRECAUTIONARY MEASURES imposed by the IRS have been removed against the goods and property of various persons linked legally or naturally to the business, aimed at saddling it with a fabricated tax debt with the goal of increasing the damage that they wished to cause.

3.     All of which demonstrates, in the most obvious way, that the business was right throughout the struggle that it undertook, since May 2010, against the hoax perpetrated by some office in the Executive. The declared nullity testifies that, for two years, each of our statements were true while those of the IRS were false; that our judicial actions were justified and were only struck down through political power; in sum, that  LEGAL RIGHT WAS ALWAYS ON OUR SIDE IN AFFFIRMING THAT THIS LEVIED CHARGE AND COERCIVE ADMINISTRATIVE PROCEDURE WERE ALWAYS INSTRUMENTS OF POLITICAL PERSECUTION.

4.     We have brought down the political apparatus that directs the IRS administration, servile representative of the same; our judicial struggle triumphed and its force lie in the truth. Nevertheless, the consequences are terrifying:  immeasurable moral damage; gigantic economic losses, and, what is truly horrifying:  one JUDGE IMPRISONED FOR HAVING THE STRENGTH TO PROTECT OUR INTERESTS, NOW RECOGNIZED BY OUR VERY ACCUSER. OR IS IT THAT THE IRS IS NOW DELINQUENT FOR HAVING RECOGNIZED THE ILLEGALITY OF ITS PROCEEDINGS AND FOR DECLARING THE NULLITY OF ALL THE PROCEEDINGS OF THE LAST TWO YEARS?  The State, via the IRS, annuls all its own blunders and the malicious acts committed, but leaves imprisoned the Judge that carried out his duty.  Beyond belief! For shame!

THIS FACT PROVES THE POLITICAL PUTREFECATION THAT EMERGES WHEN THE MASK OF THE IRS FALLS AWAY!