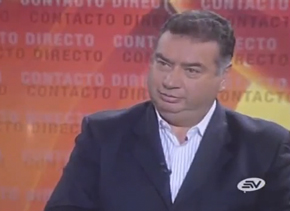 LAWS AND REGULATION ARE ISSUED TO PERSECUTE ALVARO NOBOA

During an interview carried out by Lenin Artieda, Ecuavisa, National Secretary of PRIAN, Freddy Bravo, said that Correa and his government have lost their mind due to the massive response  towards Alvaro Noboa, reflected on the attendance of 12.000 people to the Assembly organized by the political leader.

“The Electoral National Council regulation that force the candidates to be present to register their candidacy and  the prohinbition to leave the country issued by the SRI against Noboa, are clear proofs of the political persecution. Carlos Marx, controlled by Correa, is the author of this wickedness, to prevent Alvaro Noboa from becoming a presidential candicate” (…)

“Carlos Marx cannot explain why he charged Bananera Noboa, in 2005, 45 million dollars for taxes, while Dole, a foreign company which sells 20 to times more than Bananera, was charged with 700.000 dollars”

Freddy Bravo, referring to a possible alliance with  Sociedad Patriotica, said that, is not just about appointing a candidate “is about recognizing first, that having governed before, Alvaro Noboa is the biggest taxpayer in the country and for that express solidarity”

We are the political party with the largest amount of affiliations and “Alvaro Noboa’s intention is eliminate poverty in Ecuador. Not to let Correa win is a decision of the majority, which has been already taken by the ecuadorian people”