Although we have disagreed with the amount of the alleged debt determined by Ecuadorian Tax Administration against ExportadoraBananeraNoboa S.A. for the year 2005, we presented ourselves at 14h57, before the beginning of the auction, topay the alleged debt by submitting a payment plan proposal and furthermore requested an appeal to review the illegal, unethical, flawed and disproportionate assessment against ExportadoraBananeraNoboa S.A. for the year 2005. The filing of this payment plan should have suspended the auction immediately.

We are not surprised that in record time, that is, in less than two hours, the Ecuadorian Tax Administration denied the payment proposal submitted by ExportadoraBananeraNoboa, as well as the appeal to review the tax assessment revealing theprecipitatedand unconstitutional manner in which the ClementinaFarm Auction was carried out and thatit  should have been suspended by law .

The truth of the matter is now clearly exposed. This was not about collecting taxes for the Ecuadorian Tax Administration or establishing an appropriate tax assessment to ExportadoraBananeraNoboa for the year 2005 through an appeal. This was not about hearing the workerswho had requested through the press thatthe auction had to be postponedand not be held on December 4th, 2013,nor about the eco – system or Cerro Samama for which a study and a proposal had been requested. It was about, in fact,an interest in harming and persecuting Alvaro Noboa, as well as keeping la Clementina Farm, which in fact, it will never belongs to the workers, because of their inability to even pay the interest on the US$80 Million Dollar loan with the annual profits of the Farm, turning them in a few weeks, from owners to public workers of the State of Ecuador.

The only purpose was to attack Alvaro Noboa, by way of inventing an outsized and discriminatory tax assessment through an illegal process for an amount that no banana exporting company has ever or will ever pay in the history of Ecuador, that is, 100 times that of any of the banana export companies of comparable size. The only reason for this persecution is that Alvaro Noboahas been a candidate for the Presidency of Ecuador in three different occasions running against Rafael Correa, current Head of State and the only person to ever defeat Mr. Correa in the first round of the content free elections in 2006. 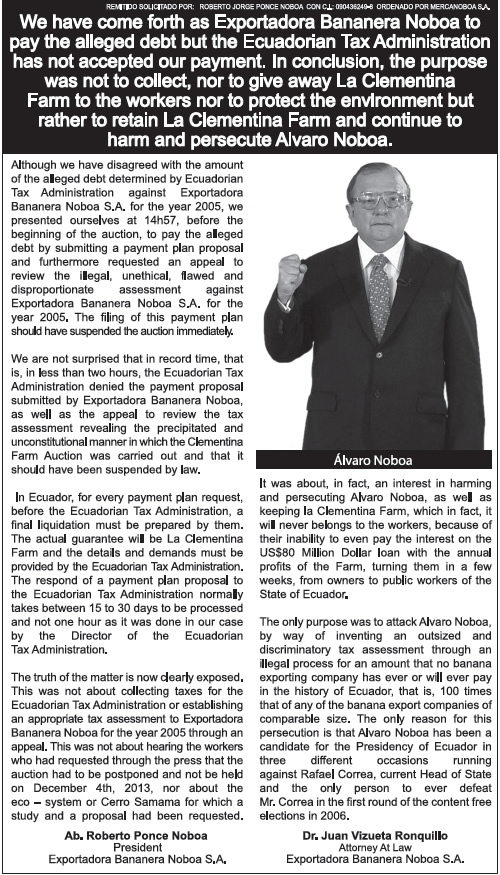