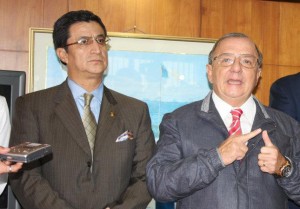 Assembly member, Luis Morales, chief of PRIAN’s bloc, declared to Radio Rumba, that is a decision from all the members of the party, more than 600.000, to defend the candidacy of their leader Alvaro Noboa. “We are not going to allow his candidacy to be prevented”, he expressed. Noboa represents hope, is a different man who will lead the country and the ecuadorians to a future of development and progress.”

Morales gave notice of the political party’s position in times when Noboa has denounced to the country of the political persecution carried out by the government which has used the SRI to violate his rights pretending to collect an inexistent tax debt for 98 million dollars.

In many occasions, Noboa has made clear that Rafael Correa’s intentions are to prevent him to run for President, because he is his major opponent who will defeat him in the second round of the elections.