With God. Ecuadorians, while everybody was speculating on the delay in the final scrutiny of the last elections held in Ecuador on February 19, I, Alvaro Noboa, businessman and leader of the Adelante Ecuatoriano Adelante Party, anticipated in press conferences and social networks the “inconsistencies” in the provision of seats in the assembly. I even demonstrated through a mathematical and concrete analysis a grave suspicion of “manipulation” favoring the legislators of the government´s party, and the potential presence of an alleged fraud.
As a victim of fraudulent actions in the past, I had experienced what electoral fraud, of which I was a victim in 1998 when the presidency of Ecuador was practically snatched from me. There are books and historical revisionism about this. These and other reasons prompted me to carry out, together with a select group of researchers, a thorough analysis of what was being forged in the face of the electorate. As I have pointed out, while it is suspected that the attention of the electorate was shrewdly drawn to a still lingering resolution concerning the second round, the publication of the seats won by the assembly members of the government unexpectedly appears with confusing percentages and even difficult to understand.

It is inconceivable that the candidates for legislators of the government´s party have outperformed their presidential hopeful (Lenin Moreno) when it is known by everybody the little acceptance of the electorate, just to give an example. When you achieve a higher percentage of votes than your presidential candidate, it is impossible not to think about these “inconsistencies” that suppose the presence of the phantom of fraud. Making a comparative analysis, as a man of numbers par excellence, I clarify that it is impossible in percentage terms that other parties with a recognized active electorate have not obtained a single legislator!

In the case of AEA (Adelante Ecuatoriano Adelante), which has more than two million affiliates and is widely accepted among Ecuadorians (as proven by social networks followers) and that should have 20% of all votes, absurdly appears with barely 1% of votes in the country’s 24 provinces. The absurd thing is that results in all provinces were from 1% to 2% appears, while the results of other parties vary from 1% to 35% as it has always happened in the Ecuadorian political history. Results in each province are always different in Ecuador.

Faced with this situation of “inconsistencies” where the numbers and historical data of past elections are those that question the process followed to give results that, rather than surprise, concern citizens, I urge you Ecuadorians following the due process and with the support of all the injured parties, to request the opening of the ballot boxes to conduct the counting of the votes in more transparent way to clarify once and for all what is going on in Ecuador.

In the specific case of the Adelante Ecuatoriano Adelante party, it is making use of all the available resources provided by law, has filed challenges to the electoral authority (CNE), making clear its discontent and concern regarding the results obtained in all the districts, both nationally and internationally .
I want to make clear that my biggest and most important concern is to safeguard the integrity of the Ecuadorian people and prevent that these so-called “inconsistencies” take away the decision power of Ecuadorians.
Glory to God, Adelante, Ecuatoriano, Adelante! 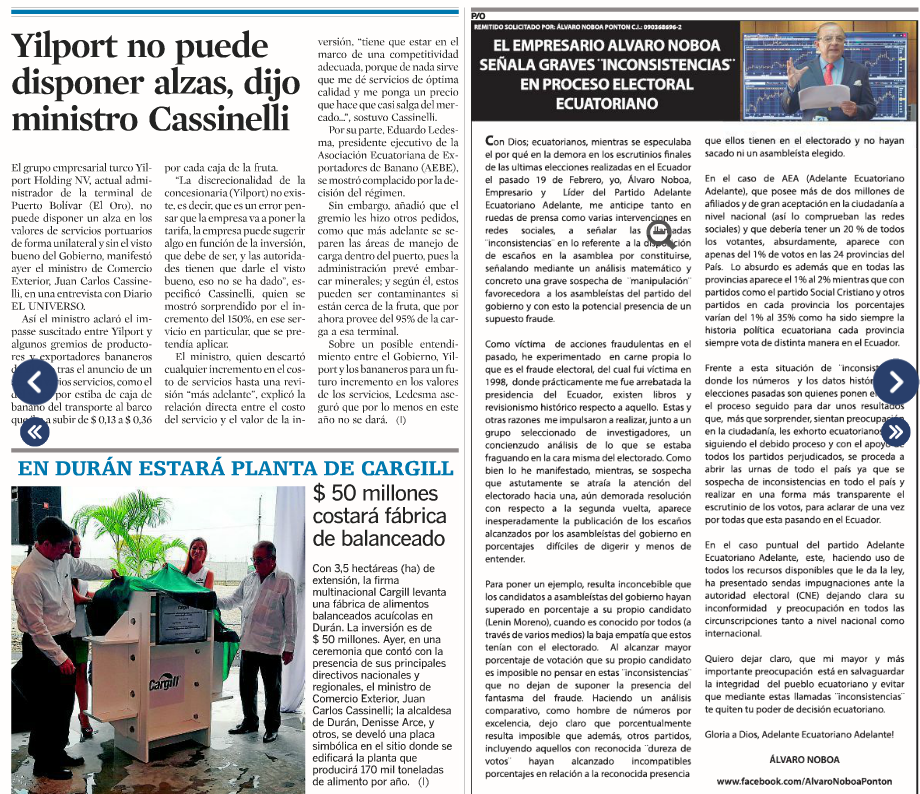